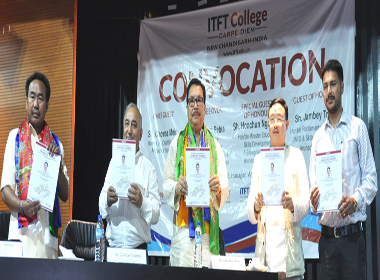 ITANAGAR, Jun 15: Arunachal Pradesh Deputy Chief Minister Chowna Mein on Friday attended the Institute of Technology & Future Trends’ (ITFT) convocation ceremony for Arunachalee students, held in the auditorium hall of the state legislative assembly here.
Mein in his speech lauded the ITFT for its role in improving quality of education, and urged the students to develop a sense of competitiveness to perform better in examinations.
“One has to skill oneself and look outside Arunachal for jobs as the state government cannot accommodate everyone in government jobs,” he said.
However, he said, the state government is making every effort to empower the youths through various skill development programmes, and by encouraging entrepreneurship through subsidized schemes.
“Avail of such benefits and make yourselves self-employed and independent,” he said.
He also said he would look into the recommendations of the International Chamber for Service Industry (ICSI) “to empower our teachers, youths and students in their endeavours to help improve the education sector of the state.”
Arunachal Pradesh Education Minister Honchun Ngandam said the government is making every effort to improve the education system in Arunachal. He informed that NCERT textbooks are being supplied to the schools, and that the Arunachal Pradesh Public Service Commission will advertise and conduct examinations for vacant teacher’s posts soon.
ICSI director general Gulshan Sharma highlighted the activities of the ICSI, and presented a seven-point recommendation to the Arunachal government.
“The North East region has potential in Buddhist pilgrimage, which can boost the tourism industry through business and cultural connectivity between the people of the North East and the ASEAN countries,” he said.
He said the scenic beauty of the region provides an ample opportunity for cinematic tourism.
He also informed that the ICSI is planning to establish a hostel in Delhi for girls from the North East.
Chief patron of ITFT, Lt Gen KJ Singh, speaking via linked video, requested the Arunachal Pradesh government to establish hostels for tribal girls in Chandigarh with the help of the union tribal affairs ministry, saying the ITFT has offered a plot to the state for the purpose.
ICSI advisor Maling Gombu also spoke.
Altogether 135 Arunachalee students received certificates of graduation and post-graduation degrees in varied disciplines.
The dignitaries also released a magazine titled ‘Emerging Career Opportunities for Arunachal Pradesh Youth and Road Map Ahead’, prepared by the ICSI. (PRO)