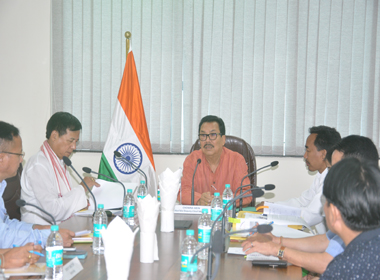 ITANAGAR, Jun 20: Deputy Chief Minister Chowna Mein convened a meeting at the civil secretariat here on Wednesday regarding the land transfer issue to set up the first Sainik school of the state at Niglok, near Pasighat in East Siang district.
Intervening in the land imbroglio between the industry and the education departments, Mein convened a joint meeting of the ministers and officers of departments of Industry and Education and East Siang deputy commissioner on Wednesday to find out an amicable solution for the land issue that was pending for the last five years.
In the meeting, the Industry department had agreed to transfer the much-needed 100 acres of land to the education department within a short time.
Mein, who had earlier visited the Industrial Growth Centre at Niglok-Ngorlung on 21 May said, “It is unfortunate that due to lack of coordination between the departments, the opening of the first Sainik school in the state is pending for the last five years”.
He asked for proper coordination and understanding between the departments to avoid such recurrence in the future.
After hearing both sides of the story from the officials, Mein asked the industry department to immediately issue a no objection certificate and transfer the 100 acres of land to the Education department and also to issue an official notification in this regard, so that the Sainik school at Niglok starts functioning from this year itself.
He also said that proper demarcation in the form of permanent RCC wall should be constructed to segregate the compounds.
Mein also suggested the Education department to consider the sites for setting up educational institutions carefully in future and to see that it does not fall near and adjacent to an industrial estate or industrial growth centre that may emit pollutants and create noise pollution, which may not be congenial for education in future.
He also assured that the state government will compensate 100 acres of land to the department of Industry for setting up of industrial estates in the districts where there is no industrial estate. He also said that the same will be incorporated in the next budget and asked the department to send the proposals to him.
Minister of Industry, Tamiyo Taga pressed for compensation of 100 acres of land to the industry department by the state for setting up of industrial estates in other districts too. He also informed that the department had no objection in setting up of the proposed Sainik school in principle but cited that there had been no specific orders and formal communication regarding the land transfer from the competent authority so far.
The Industry department also agreed to let the infrastructure within IGC to be used by the Sainik school authorities with the condition that it be transferred back to the IGC within three years.
“We cannot afford to lose the Sainik school nor the IGC at Niglok-Ngorlung. Therefore, an amicable solution is a welcome step,” Education Minister Honchun Ngandam said. He also asked the officers to complete such formalities well in time so that such delay does not arise in future.
Among others, Dr Madhu R Teotia, Secretary Education, N T Glow, Special Secretary (Industry), Tamiyo Tatak, DC Pasighat, Rajeev Takuk, Director Industry, Tapi Gao, Director Elementary Education, Captain Edwin JothiRajan (Indian Navy), Principal, Sainik School Goalpara, Jongge Yirang, DDSE Pasighat and N Jamoh, DDI Pasighat were also present in the meeting.
The first academic session for the year 2018-19 of the Sainik School will commence from 27 August this year.