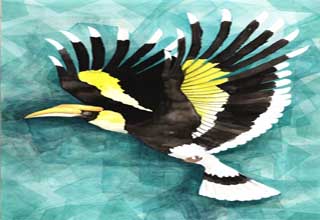 ITANAGAR, Jun 21: Artist Ogin Nayam was felicitated by Chief Minister Pema Khandu on Thursday for his contributions to Arunachal Pradesh in creating the state souvenir.
To commemorate 30 years of statehood of Arunachal Pradesh in February 2017, the chief minister had commissioned a painting by Ogin, who is one of Arunachal’s most promising young artists.
The painting, titled ‘Arunachal Rising’ (water colour on paper, 2017) symbolically depicts the ascent of oneof India’s youngest states with the flight of the hornbill, and isused today as the state souvenir.
The painting shows the great hornbill in magnificent flight. The Great Pied Hornbill (Bucerosbucornis) is the state bird of Arunachal Pradesh and it is represented in the emblem of the government.
This painting has also been specially re-crafted into a special edition with the finest Swarovski crystals, produced with their patented lead free formula, which has been presented to the President of India.
Ogin is one of the emerging faces of talented Arunachal artists. He primarily works with watercolours and occasionally experiments with different mixed mediums. A self-taught artist, hehas developed an eclectic style of painting with a minimalistic approach.
Pema, while appreciating the young artist, wished him success in his creative journey. (CMO)