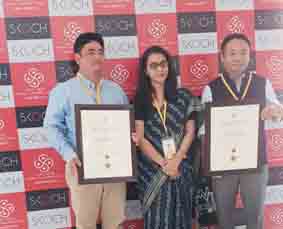 NEW DELHI, Jun 21: In a proud moment for the state of Arunachal Pradesh, the Measles Rubella Vaccination Campaign and Chief Minister’s Free Cancer Chemotherapy Scheme bagged the ‘SKOCH-Order-of Merit’ Award at the 52nd SKOCH summit held at the Constitution Club of India, here on Thursday.
The award, given in recognition of the services provided to the people in the country, was received by Special Secretary Health & Family Welfare, Dr Tapasya Raghav, NHM nodal officer, Dr Dimong Padung, and state nodal officer Cancer Control Programme Dr S Tsering on behalf of the Health department.
The Skoch Group is a think tank dealing with socio-economic issues with a focus on inclusive growth since 1997. It is also known for instituting India’s highest independent civilian honors in the field of governance, finance, technology, economics and social sector.
Dr Raghav, who has been proactive in insuring full coverage under MRV campaign, had initiated adoption of all round measures against any drop outs both in children and pregnant women. Mission mode oriented in approach, the MRV team under Dr Raghav charted a list of preparatory activities wherein the campaign was staged at state level, district level and block level.
Chief secretary Satya Gopla and commissioner Health and Family Welfare Kaling Tayeng reviewed and monitored the project headed series of meeting with the State Steering Committee for Immunization (SSCI) and State Task Force for Immunization (STFI) for the implementation.
The state was figured for setting record of vaccinating 4,43,054 beneficiaries out of 4,38,386 target beneficiaries achieving 101.06 percent vaccination coverage under MRV held during February-March 2018.
Meanwhile, the state also bagged an award for the Chief Minister’s Free Cancer Chemotherapy Scheme. Under the scheme, the State Cancer Society of Arunachal Pradesh is in agreement with the Tata Memorial Hospital Mumbai for procurement of chemotherapy medicines at high concessional rates which is being provided free of cost to APST cancer patients up to a ceiling of Rs 10 Lakh per patient per annum.
The state has registered 3,794 cancer patients in the last five years as informed by Dr Tsering. As on date, 407 cancer patients have benefited from the scheme and 2,427 cycles of chemotherapy are being/ have been administered to these patients. The award was conferred for making cost-effective provisions for affected families in the state.