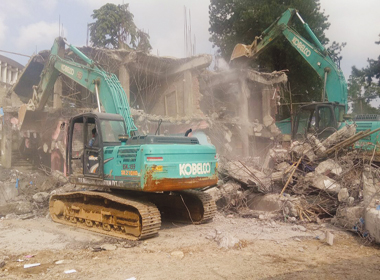 Staff Reporter
ITANAGAR, Jun 24: The district administration carried out an eviction drive, dismantling a structure near the cafeteria adjacent to the Indira Gandhi Park here on Sunday.
The eviction drive was carried out in compliance with the Gauhati High Court order under the guidance of Estate Officer cum EAC Hengo Basar.
It is said that the land is under the department of Tourism, and was illegally procured by one Dr Biman Natung, who has filed an FIR at the Itanagar Police Station, terming the eviction drive illegal and claimed that no prior notice was served to him by the administration.
“According to the Public Premises Act-2003, a proper notice should have been served before carrying out the eviction drive”, Dr Natung said.
In the FIR, he also stated that he did not receive any eviction notice from the deputy commissioner or from the extra assistant commissioner.
Terming the eviction as illegal, Dr Natung sought immediate action against the DC and EAC under “illegal trespassing and dismantling of the private structure”.
Reportedly, the case pertaining to illegal occupation of government land was filed earlier in 2017 by the administration, and a subsequently notice was served and enough time was given to Dr Natung for the clearance of structure.
EAC Hengo Basar informed media persons that the land encroachment case was transferred from single bench to double bench and accordingly on 21st June, 2018, the court order had directed for demolition of the structure.
“When the order has already been passed by the High Court, it makes no sense in issuing a second notice to the people,” the EAC clarified while responding to Dr Natung’s claim of not receiving an eviction notice.
The EAC informed that the High Court in ‘WA case no 112/2018 Biman Natung vrs Sri Samir Kipa & 6 others’ has passed an order for eviction of illegal structure to retain the land to the Tourism department, to whom the government had allotted the land.
The land, after eviction, is to be handed over officially to the DTO HQ and assistant director in written by the estate officer and DLRSO on behalf of the Capital Complex DC for their repossession.
DC Prince Dhawan stressed that the district administration has zero tolerance against such illegal encroachers, adding that such eviction drives should give a clarion call to all the illegal encroachers and set an example to refrain from such illegal activities.
The EAC was accompanied by LO to DC Sanjiv Chakraborty and DLRSO L Lonchung. (With inputs from DIPRO)