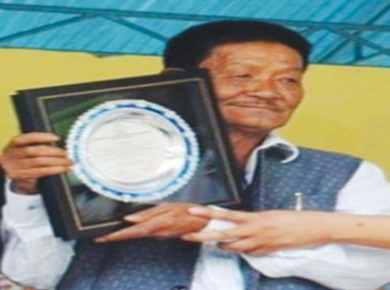 ITANAGAR, Jun 30: Renowned Apatani singer, composer and academician Nani Challa passed away at the age of 64 at his residence at P Sector here on Saturday after a brief illness.
Challa, who had retired as a school principal, was also instrumental in bringing social reforms such as prohibition of child marriage, forced marriage and abolition of tattooing and nose puncturing.
As a lyricist, he composed more than 100 Apatani songs, including the popular Dree festival anthem, ‘Ngunü Tanü Ka Dree Janda Dukañ Küne Talyi’ and the Apatani Youth Association anthem, ‘Tanü Nyimuñ Yapa Ka’. He also conceptualized and evolved the Pri dance and song besides several acclaimed Apatani songs.
His first modern song composition was ‘Mundo Mundo Ngunu Mundo Kappa Doko Da’, sung by late Michi Tagur. Other popular songs include ‘More Pakku Kone Duto La’, ‘Danyi Reela Byo’liñkenda’, ‘Arro Konchi Hapiñ Güda’, and ‘Nükahenüñ Aba Münüñ Sado Nyañ’.
In the late sixties, when it was decided to celebrate Dree at the community level, he took up the responsibility of organising traditional dances, songs and drama competitions among the Apatani villages.
A man of multifaceted personality, he entered into active politics for a brief period, and contested unsuccessfully in the 1980 general election to the legislative assembly from the 10-Ziro assembly constituency as a Congress (U) candidate.
He was awarded many times, which included lifetime achievement awards by the Central Dree Festival Celebration Committee, Ziro, the Popi Sarmin Society (PSS) and Capital Complex Dree Festival Celebration Committee, Itanagar.
His happiness lay in being a teacher, and he served in the state education department until his retirement as principal in 2014.
Challa is survived by his wife, six sons and a daughter.
Meanwhile, the entire Apatani community has deeply mourned his demise.
The Tanw Supun Dukun (TSD), the PSS, and the Arunachal Teachers’ Association (ATA) extended condolences to the bereaved family in separate messages on Sunday evening.
The TSD said his untimely demise is an irreparable loss to the Apatani community as well as the state.? ?Members of the PSS expressed shock and said that they were aggrieved to hear of the sudden and immature demise of Challa. It also gave assurance that its members would stand by the family in this hour of grief.
Challa was also the incumbent adviser to the PSS.
The ATA said it believes that the contributions made by Challa would serve as a roadmap for the entire state.?
The organisations paid tribute to Challa and prayed to the almighty to give enough strength to the bereaved family to bear the irreparable loss and allow his departed soul to rest in peace.
The Apatani Career Guidance Forum also expressed profound grief and sorrow at the demise of Challa, and said the vacuum created in the society by his death would be difficult to fill.?
The Central Dree Festival Committee Ziro also deeply mourned the untimely demise of Challa.
The committee described Challa as “a legendary figure, lyricist, academician, social reformer and a pioneer in development of Apatani culture and language.
“His untimely demise is a great loss not only to his family but also entire Apatani community,” it said.