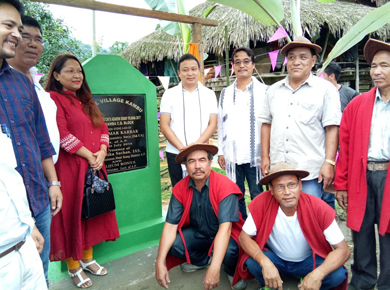 KAMBA, Jul 2: Sports & Youth Affairs Parliamentary Secretary Nyamar Karbak laid the foundation stone for Kambu model village here on Monday, under the Chief Minister’s Adarsh Gram Yojana (CMAGY).
Kambu, which falls in Kamba circle of West Siang district, is one of the oldest villages under Liromoba assembly constituency, and has a population of over 600 people.
Addressing a gathering of former panchayat members, gaon burahs and locals, Karbak said, “The conversion of Kambu into a model village will go a long way in developing the area as it will now be provided with 24×7 piped drinking water, electricity, primary school, primary health infrastructure, internal roads, avenues of employment generation, and open defecation free status.”
Saying that the developmental activities in the constituency would be taken up in phases, Karbak, who is also the local legislator, gave assurance that all the villages under Liromoba assembly constituency would soon be converted into model villages.
He advised the locals to maintain the cleanliness of their surroundings, “so that the true status of a model village is achieved.”
West Siang district BJP in-charge Tayek Goi urged the youths to take up economic activities in rural tourism, agriculture, etc, and to make use of the schemes and policies launched by the state and central governments.
Under the CMAGY, a total of 60 model villages (one village per legislative assembly constituency) will be developed initially within a period of two years. Selection of the villages is usually done by a committee headed by the deputy commissioner, along with heads of offices of the respective districts and the MLA concerned.
A total outlay of Rs 1.5 crore would be provided in three phases for the physical and infrastructural development of a model village.