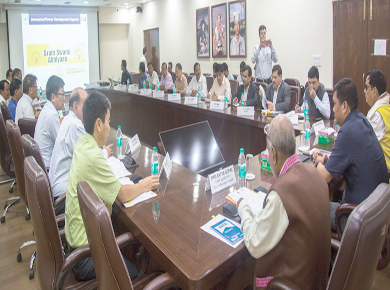 ITANAGAR, Jul 12: Chief Minister Pema Khandu called for a well-coordinated approach by all stakeholders for successful implementation of the ambitious Pradhan Mantri Sahaj Bijli Har Ghar Yojana – ‘Saubhagya’ – on time in the state.
In a meeting with officials of the Rural Electrification Corporation (REC) – the nodal agency for Saubhagya – here on Thursday, Pema said that in order to meet the December 2018 deadline, the REC needs to work in tandem with the state power department and execute various works concurrently.
The CM said the state government would mobilize all available resources to achieve 100% electrification of all households in the state by 31 December this year.
Referring to the Aspirational District Scheme under the Centre’s Gram Swaraj Abhiyan (Phase-II), which aspires to electrify Namsai, the selected district under the scheme, by 15 August, 2018, Pema urged the REC to complete wiring in all leftover households by July-end, so that the entire district is electrified as scheduled.
REC chairman PV Ramesh informed that the REC has established an office in Itanagar “for the sole purpose of implementing the scheme successfully in the state on time.”
He sought cooperation and coordination from the power department officials and district administrations, to which Chief Secretary Satya Gopal, who was also present, assured that directives would be immediately forwarded to all the deputy commissioners in this regard.
The meeting was also attended by Power Minister Tamiyo Taga, Finance Commissioner Kaling Tayeng, Power Commissioner GS Meena, REC officials, and chief engineers and superintendent engineers of the power department also attended the meeting.
The Saubhagya scheme was launched by Prime Minister Narendra Modi on 25 September, 2017, to provide free electricity connections to all households (both APL and BPL families) in rural and urban areas. The scheme in Arunachal Pradesh will provide electrification to 44806 un-electrified households across the state, which includes 14113 connections to BPL households. While 39376 will be on-grid connections, 5430 will be off-grid. (CMO)