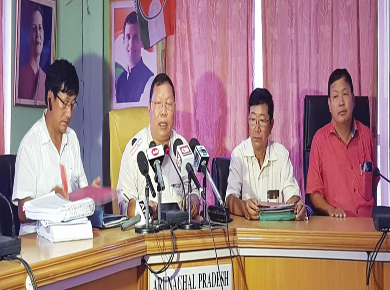 Staff Reporter
ITANAGAR, Jul 12: Arunachal Pradesh Congress Committee (APCC) president Takam Sanjoy dismissed the threat of defamation cases issued by BJP MLAs against the APCC and its Trans-Arunachal Highway (TAH) compensation issue assessment committee members, saying the Congress is ready to face defamation cases.
Addressing reporters here on Thursday, Sanjoy said the threat of defamation cases made recently by Raga MLA Tamar Murtem and Ziro MLA Tage Taki were “totally uncalled for.”
He said the APCC is soon going to call on the governor with all relevant documents showing the involvement of political leaders in the compensation scam, and seek his intervention in the matter.
“We will also hold public rallies at Raga, Yachuli, Boasimla and Ziro on the amounts of Rs 40 crore (Joram-Koloriang) and Rs 198 crore (Potin-Bopi) eaten away in the form of daylight robbery,” Sanjoy said.
Terming the TAH compensation scam “high-level corruption,” Sanjoy said if the Special Investigation Cell is not competent enough or is afraid to arrest the political leaders, the Congress has the authority to seek the intervention of the Central Bureau of Investigation, and would indeed organize a ‘Delhi Chalo’ programme as well.
While Deputy Chief Minister Chowna Mein has already said that a committee chaired by him had reduced the width of the road from 24 metres to 14 metres “to avoid large-scale demolition,” Sanjoy demanded to know the reasons for reducing the width “without any file movement and proper procedure.”
On 18 May, 2017, the government of India had accorded sanction, on the basis of the detailed project report (DPR) submitted by the Lower Subansiri district administration through its agencies to the ministry of road transport & highways, for the final DPR of 24 metres width of the TAH in Lower Subansiri, said Sanjoy.
He claimed that the width of the road was reduced to 14 metres in the meeting chaired by Mein, even after funds had been received for 24 metres.
On 11 January, 2017, a meeting was held here under the chair of the deputy chief minister. The MLAs of undivided Lower Subansiri and several stakeholder department officials attended the meeting and reduced the width of the road.
While Sanjoy could not provide a clear answer on how there could be anomalies in reducing the width of the road when the meeting headed by Mein had been held four months prior to the sanction accorded by the government of India, he pointed out that, “instead of following procedure and showing an extraordinary gazette notification,” the then Lower Subansiri deputy commissioner issued a notice of the minutes of the meeting to the public that payments would be made for 14 metres.
The deputy commissioner had issued the notice nearly a year later, on 4 January, 2018.
Claiming that the state government has no locus standi to reduce even an inch of the national highway land, Sanjoy also sought inquiry against the officials who drew the minutes of the meeting held on 11 January, 2017.
While he did not deny the involvement of the district administration in the scam, Sanjoy claimed that “the three people arrested in the case have been made scapegoats to protect the leaders.”
The APCC did not provide any document to the journalists back its claims, saying the documents would be produced before the governor for further action.
Sanjoy also sought investigation into the Potin-Bopi (149 km) stretch of the TAH, and expressed confidence that “hundreds of arrests would be made during investigation.”
Earlier, on 6 and 10 July, Murtem and Taki in separate press conferences had denied the allegations made by the APCC’s assessment committee regarding their alleged involvement in the Lower Subansiri TAH compensation issue, and warned of defamation charges against the Congress party and individuals.