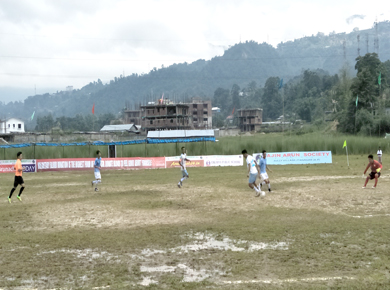 JOLLANG, Jul 21: A seven-a-side football tournament began at the general ground here on Saturday.
Papum Pare DFA president Debia Muj, who kicked off the tournament, spoke about the importance of games and sports, and about the popularity of football throughout the world.
He encouraged the young football players to play the game with true sportsman spirit.
Organized by the Ajing Arum Society in collaboration with the Arunachal Pradesh State Aids Control Society, the objective of the tournament is to create awareness on HIV and AIDS, said the organizing committee.
The opening match, which was played between Papum Pare Legends and Champion FC, ended in a 2-2 draw.
The second, third and fourth matches of the day were won by Young Generation, Khyoda Brothers and Hornet FC, defeating their respective opponents Abotani FC (4-2), Beyong Brothers (4-0) and Tali G FC (2-0).
Twenty-four teams are participating in the tournament.