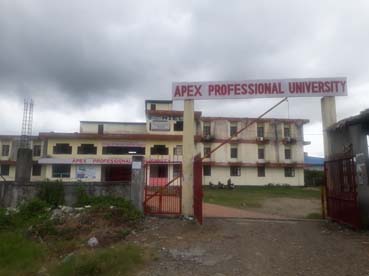 ITANAGAR, Jul 26: Once again the Apex Professional University (APU), based in East Siang district headquarters Pasighat, is in the midst of controversy, beset by the familiar charges of commercializing education and selling degrees from a ramshackle infrastructure, in violation of the University Grants Commission (UGC) norms.
On 21 July, the East Siang administration constituted a fact-finding committee, headed by ADC (HQ) Tatdo Borang, to inquire into the allegations levelled against the university by the Adi Students’ Union (AdiSU), and the deadline is at hand as the committee has to submit its report within seven days.
The AdiSU has raised several issues against the APU, including absence of permanent infrastructure, lack of permanent teaching faculties, frequent changes of faculty members and the vice-chancellor, issues with the university’s endowment fund, and, more alarmingly, the credibility of the university’s chancellor, Prof Dhanwant Singh Matharoo, himself.
The union has demanded suspension of the university’s academic activities until all the required standards are met.
“We are not against the development of APU, but we are against the quality of education being imparted by the university under such condition,” said AdiSU president Nang Gao.
The Arunachal Times has carried out a thorough investigation into the current status of the university. Established on 10 May, 2013, by an act of the state legislative assembly, as a private university funded by Bangalore-based Apex Foundation, the APU started functioning from the urban development (UD) department’s shopping complex in 2 Mile area of Gumin Nagar in Pasighat in July 2013.
Even after completion of five years, no UGC expert committee has been constituted till now to inspect the university. The UGC on its official website updated: “Additional information, called for inspection purpose from the university, still awaited.”
APU vice-chancellor Dr Kanwal Singh claimed that the university had written to the UGC several times for inspection but no team from the UGC turn up.
This daily accessed a copy of the 30-year lease agreement made between the sponsoring body (Apex Foundation) and the East Siang deputy commissioner-cum-DUDA chairman on 19 November, 2014, to run the university from the UD shopping complex at a rental charge of Rs 40,000 per month.
Interestingly, there is no clause in the Arunachal Pradesh Colleges and other Institutions of Higher Education (Establishment and Regulations) Act, 2010, specifying a maximum period for which a temporary building can be leased.
In July 2014, the Apex Foundation acquired a plot of land, measuring 49,989 sq mtrs, from a private owner at 5 Mile area in Pasighat for establishing the university. However, so far only a few pillars have been erected at the proposed site.
UGC guidelines emphasize on minimum standards of academic and physical infrastructures to run an institution.
The AdiSU has alleged that the university is being commercialized by compromising quality education, as it offers far more courses than the strength of its faculty members can possibly handle. As much as 50 distinctive courses (technical and non-technical) are being offered by the university in both undergraduate (UG) and post-graduate (PG) levels, including 20 master of arts and 10 skill development courses, ranging from MVoc in fashion designing to MVoc in journalism and mass communication.
Surprisingly, the university has only 22 faculty members, including five MA degree holders and an MSc degree holder who has neither cleared the NET nor earned a PhD.
However, on being asked, the vice-chancellor shrugged off the students-teachers ratio issue, stating that managing teachers is an easy job.
“Managing teachers is not a difficult task. We manage teachers depending on the students’ admission in a particular course,” Dr Singh said.
It is also learnt that instances of detention of any student during their course are rare, since the university has its own examination controller.
“In general courses, which do not have a regulatory council, unlike technical courses, it is very difficult to monitor the quality of education,” said a former higher & technical education officer.
“The state government is responsible for this debacle. Once the act is passed, it gives licence to private universities to sell degrees,” he added.
The appointment of the current APU chancellor, Prof Dhanwant Singh Matharoo, who is also the chairman of the Apex Foundation, has also raised many eyebrows, as Prof Matharoo was appointed by the officer on special duty to APU.
Prof Matharoo is among the accused in the Chandra Mohan Jha University (CMJU), Shillong, racket. He was arrested by Meghalaya Police on 13 March, 2014.
On 30 September, 2013, the then Arunachal Pradesh Governor Nirbhay Sharma wrote a confidential letter to the then chief minister Nabam Tuki, seeking the status report on private universities in the state, particularly the APU.
Expressing concern over adverse reports on private universities, Sharma suggested to the then chief minister to institute remedial measures at the earliest to evolve a strict regulatory mechanism and monitor adherence to the laid down standards of private universities.
The governor also reflected that none of the universities has proper infrastructure, and that the task of centrally regulating and monitoring their functioning was quite complex.
Despite, the then governor’s repeated cautions, the state government failed to constitute a regulatory commission, thereby allowing the university to churn out degrees from a shopping complex.
Meanwhile, Education Secretary Madhu Rani Teotia told this daily that the Arunachal Pradesh Private Universities Regulatory Act was enacted in 2017, “but it is still not in proper shape as the members are yet to be appointed to the commission which was formed as a result of the act.”
Once the commission comes into existence, the private universities in the state can be strictly regulated, she said.