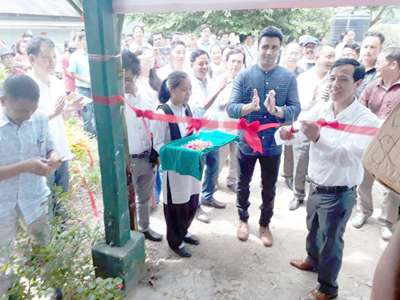 PANGIN, Jul 30: The jan sunwai sammelan for Siang district was launched by local MLA Tapang Taloh here on 29 July.
Addressing the gathering, Taloh spoke on the significance of the event where all the departments had gathered under one roof to provide various services to the people. He informed about the schemes launched by the government for the benefit of the people, and urged everyone to take full advantage of such programmes and schemes.
He urged the HoDs and officers to actively participate in such programmes in the larger interest of the public.
Deputy Commissioner Rahul Singh informed that such programmes would be held in all administrative circles of the district, with focus on holding them in areas where people have difficulty accessing government department’s services.
The sammelan featured stalls set up by all the departments.
Altogether 546 patients were registered and offered free medical check-up and tests by specialist doctors in a health camp held during the programme, and an account opening stall was also set up in collaboration with SBI Pangin, where about 1062 account opening forms were processed. Accounts were also opened under the Suraksha Bima Yojana and the Jeevan Jyoti Bima Yojana.
An Aadhaar camp was set up, where over 200 cases of enrollment, correction and issuance of forms were taken up. Apart from this, a veterinary medical camp was set up, offering free treatment, vaccination and free medicines.
Around 200 ST, PR, income, birth, death, etc, certificates were issued, and around 469 forms were processed.
Forms on LPC, succession and marriage certificates, trade licences, ration cards, Ujjwala KYC, old-age and widow pension schemes were also issued or processed by the departments concerned. Soil heath cards, agricultural seeds, sprayers, pesticides, etc, were distributed.
Awareness on vermicomposting and paddy-cum-pisciculture was imparted and registration of farmers done. Job card forms were issued under the MGNREGA. Forms were also issued for PMAY, IHHL under Swachh Bharat Mission (urban), and street vendors under DAY NULM.
Ujala LED bulbs and LED fans were made available at subsidized rates, and red coats were distributed to the head gaon burahs and gaon burahs from various villages.
A career counselling counter was also set up, where 84 students received services. IEC materials were distributed by all departments, including disaster management, and the District Disaster Management Plan 2018-19 was launched on the occasion.
The Swachh Survekshan Grameen – 2018 for the district was also launched by the MLA.
The CM Dronacharya Gurukul Yojana for Siang district was also launched, and commendation certificates were distributed to 10 meritorious students from all over the district selected under the scheme.
Superintendent of Police Kushal Pal Singh, HoDs, administrative officers, officials and staffers of all departments, head gaon burahs, gaon burahs of various villages, public leaders, school teachers, students and general public attended the jan sunwai sammelan. (DIPRO)