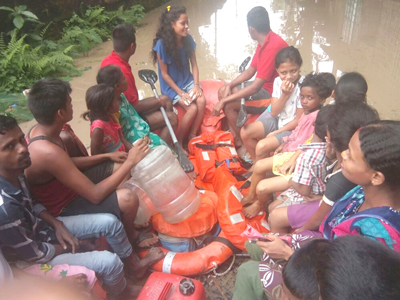 SIVASAGAR (Assam), Jul 30: Over 100 people were evacuated from two flood-hit villages in Sivasagar district of Assam by the NDRF on Monday.
The NDRF team from Doimukh in Papum Pare district of Arunachal Pradesh, headed by Inspector Ravi Kant evacuated 71 persons from Kalibadi Phukhan Nagar, and 43 from Cholegaon village, according to an NDRF release.
All the rescued people, including 51 children, have been shifted to safer places.
On Sunday, the NDRF team had evacuated 71 stranded people from the flood-hit Cholegaon.