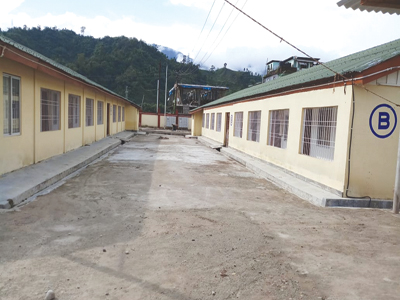 [ Junroi Mamai ]
ITANAGAR, Jul 30: With the Tomo Riba Institute of Health & Medical Sciences (TRIHMS) announcing the commencement of its academic session from 1 August, one of the most awaited projects of the state has been finally been realized.
Though the project is finally seeing the light of the day, there was much controversy surrounding it since it was first approved by the GoI in 1999.
In 2016, the TRIHMS authorities had begun the process of land acquisition for the purpose of establishment of the medical college. The 17 acres of land allotted for the project in Naharlagun was termed inadequate according to Medical Council of India (MCI) guidelines, and later an additional 2.5 acres was allotted to the TRIHMS on 24 October, 2017.
At the same time, the MCI team, which had visited the state to inspect the progress of the medical college found shortcomings in terms of adequate college structure construction and faculty recruitment, and denied according its approval to the TRIHMS authorities. It was only after much persuasion and efforts on the part of the state government that the union health & family welfare ministry on 15 May 2018 issued the letter of permission to the state government to start the medical college from August this year, with an intake of 50 MBBS students.
Permission has been accorded initially for a period of one year, which would be renewed on a yearly basis, subject to verification of achievement of annual targets as stated by the state government.
Presently, the TRIHMS authorities, after overcoming all the hurdles, have announced 1 August as the date to officially induct the first batch of MBBS students during an induction ceremony which will be attended by Chief Minister Pema Khandu and MCI President Prof Jayashree Mehta, among others.
An official of the TRIHMS informed that, of the total 50 MBBS seats, eight have been reserved under the all India quota, two have been reserved for non-resident Indians, and one for TRIHMS faculty, while the remaining 39 seats have been reserved under the state quota.
“The admission process has been completed, and till now 27 students have fulfilled all formalities for induction. This time the number of girl students is greater than that of the boys,” he said, adding that the first counselling for the selection of students was completed on 17 July.
The official said the appointment of faculty for the first-year MBBS has also been completed. The first-year MBBS course will include biochemistry, physiology and anatomy subjects, for which the institute has adequate teaching faculty, comprising three professors, three assistant professors, two associate professors, and six tutors.
“Equipment, specimens, cadaver and bones have been made available,” he added.
Informing about the institute’s other facilities, the official said the institute presently has two lecture halls with a seating capacity of 120 each. He said work on the laboratory for first-year students has been completed, and fully furnished hostels for both boys and girls have also been completed.
“The four-storey building adjacent to the Tomo Riba State Hospital will have anatomy, microbiology and pathology departments, while the third floor will have the forensic medicine department,” the official stated.