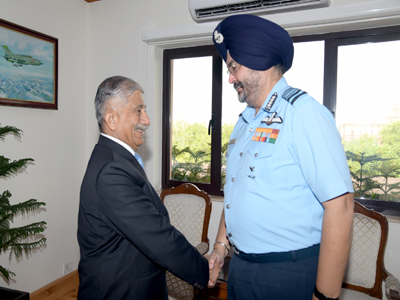 NEW DELHI, Aug 1: Governor of Arunachal Pradesh Dr BD Mishra on Wednesday met the chief of the Air Staff, Air Chief Marshal Birender Singh Dhanoa here to discuss various issues related to the Indian Air Force and ‘Pay back to society group’ (PBSG) of serving armed forces officers from Arunachal Pradesh.
The governor took up the issue of recruitment of youth from Arunachal Pradesh in the Indian Air Force with the chief of the Air Staff and requested him for his assistance through PBSG.
Informing that, at present out of the 33 officers in the armed forces, there are four air force officers from Arunachal Pradesh, including Group Captain RD Musabi, the governor asked the Indian Air Force chief to allow the officers to come to the state for visits to various schools and colleges to motivate the youth to join the Indian armed forces.
The governor also took up the issue of Dullungmukh Air Force firing range. He emphasized for a holistic approach in regard to the range with safety of the local population in the area in top priority, but at the same time without disrupting the battle worthiness of the IAF fighter squadrons and the air warriors.
The chief of the Air Staff assured his best in addressing the issues placed by the governor.
Later in the evening, the governor, who is on an official tour to the national capital Delhi also met National Security Advisor Ajit Doval. They discussed on security issues, including border area development.