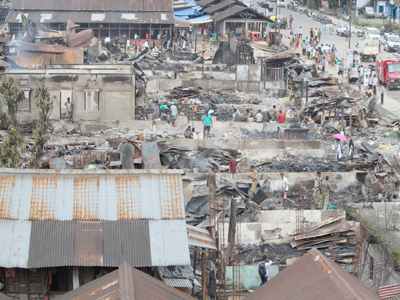 [ Karyir Riba ]
ROING, Aug 1: The devastating fire that broke out at the main market area here on Tuesday night devoured 26 shops and two godowns. Four other shops were dismantled using excavators to stop the fire from spreading further.
According to sources, the fire that started around 8.30 pm spread rapidly and engulfed the nearby shops within no time. The inferno was brought under control after over three hours of joint efforts by fire fighters form Roing fire brigade, Chapakhowa (nearby Assam) and Lohit. Tankers and excavators from BRO and PHED, and an NDRF team from Chowkham were also pressed into service, informed SP Sanjay Kumar Sain.
The fire is believed to have started either from New Bakery or from Galaxy Restaurant. However, the actual cause of fire is yet to be ascertained.
There has been huge damage and loss of property. Fortunately, no casualties have been reported. However, Surjoy Kant Mech, Station Fire Officer of Chapakhowa, has reportedly, sustained some minor injuries while dousing off the fire.
Reportedly, many people were found to be stealing commodities like mobile phones, grocery items, alcohol etc, from the burning shops on the pretext of helping.
“We tried to save some of our belongings but what little we had saved from the shops was being stolen in front of our eyes. We could not do anything but to watch in despair”, said a shopkeeper.
Meanwhile, Chief Minister Pema Khandu has expressed his grief and concern over the devastating fire.
“I am saddened by the devastating fire that devoured one-fourth of Roing market yesterday evening though no loss of lives has been reported. At this moment of sorrow and loss, I pray for strength and courage to those affected and stand by them in this excruciating moment,” he said in a statement on Wednesday evening.
Pema expressed gratitude to the Indian Army, central paramilitary forces, Assam police fire services and the Border Roads Organization for assisting the state police in battling the raging inferno.
“I am in constant touch with the district administration taking stock of the situation. The district administration has been instructed to provide immediate relief and assess the loss and damage. One of my minister colleagues has also been asked to rush to Roing to monitor the relief work,” he informed.
The administration has constituted an assessment committee with a circle officer as chairman and the DySP, DDMO and DFCSO as members. The committee will submit its assessment report by Thursday.
Immediate monetary relief has been provided to all the victim families by the administration as per norms. Situation is under control and administration is keeping strict vigil.
Temporary arrangements for food and shelter have been made for the victims at the Roing circuit house by the district administration and the National People’s Party (NPP) Roing team under directions from MLA Mutchu Mithi.
A total of 39 victims from six families have been accommodated there, while a few others have chosen to find place with their relatives.
Mithi has also sanctioned Rs 50 lakhs for the victims from his MLALAD fund.
Mithi said that he will take up measures to upgrade and ramp up the existing fire services of the district, and will also arrange temporary shelters for the fire affected victims if required.
Parliamentary Secretary Gum Tayeng also visited the accident spot and informed that she has spoken with the chief minister and has made him known of the situation. She said that she has requested the CM for a good amount of relief fund for the victims to which he has given his assurance. (With inputs from CMO)