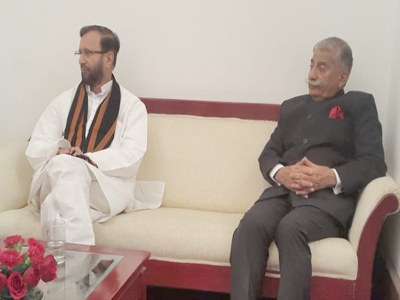 NEW DELHI, Aug 3: Arunachal Pradesh Governor BD Mishra met Union HRD Minister Prakash Javadekar here on Friday and requested the minister to expedite the process of appointment of a director for the NIT, and a vice-chancellor for RGU.
Javadekar assured the governor that the appointments would be done very soon.
The governor stressed on enhancing the quality of higher education in the state to match the requirements of employment avenues.
He also requested the minister for establishment of kendriya vidyalayas (KV) in the border towns of Taksing/Limiking (in Upper Subansiri district), Mechukha (West Siang), Tuting/Singa/Geling (Upper Siang), and Kibithoo/Walong (Anjaw).
With the opening of KVs in the distant and difficult areas, the local people will have facilities to educate their children in a good school, Mishra said.
“Then they would like to stay in their original village and area, which will be good in their interest, their family, their village, our own state and the nation,” he added.
Mishra also sought the minister’s assistance in proper distribution of NCERT textbooks in the state in the coming years. (PRO, Raj Bhavan)