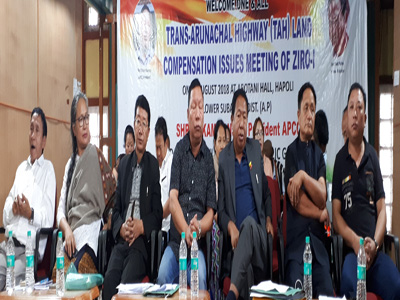 ZIRO, Aug 5: Arunachal Pradesh Congress Committee (APCC) president Takam Sanjoy has demanded the arrest of all the people involved in the Trans-Arunachal Highway (TAH) scam.
Addressing a large gathering in Abotani Hall here on Saturday, Sanjoy said the people of the state had lost confidence in the investigation carried out by Special Investigation Cell, and demanded an inquiry by the Central Bureau of Investigation (CBI).
“Being a responsible opposition party in the state, it is the duty of the Congress to make the people aware of the consequences of the anomalies in the TAH compensation distribution to the affected people living on both sides of the road from Potin to Bopi,” Sanjoy said.
“The genuine land-affected people of the area have been cheated, and therefore people are demanding the arrest of all the officers and leaders involved in the scam. The people of the area are not satisfied with the present investigation process, as only a few people have been arrested, and that, too, not in the case of the TAH from Potin to Bopi but from Joram to Koloraing. The Congress party demands that all should be arrested at the earliest,” said Sanjoy.
Referring to an affidavit in which a transaction of Rs 3 crore was reflected, he questioned how such a huge sum of money was available with a government officer. He also demanded to know how people who do not have any plot of land on the RoW received crores of rupees as land compensation.
The Congress party demanded recovery of all the fake bills issued, and said the bills should be deposited to the account of the government exchequer. It also called for early start of the tender and other processes, so that work on the highway begins at an early date.
Speaking about the constant shifts of loyalty among the leaders of the state, Sanjoy announced that in the coming assembly elections the Congress party would “give 70% of the tickets to new faces and to those who stick with the party’s ideology.” He urged the people of state to teach a lesson to the leaders who changed their party “not once but five times in a single term.”
Former minister Padi Richo in his address elaborated the history of the TAH issue, from 2009 to date, and said all the leaders of the area should come together if they feel the issue is for the general public.
Richo reiterated that everyone, including the leaders involved in the scam, should be arrested and there should be free and fair investigation.
Among others, All India Mahila Congress general secretary Jarjum Ete, Lower Subansiri District Congress Committee (DCC) president Hage Nama, DCC general secretary Kime Nyame, public leaders, social workers, landowners affected by the TAH scam, and Ziro-I Area Apatani GB Association executive president Kime Yapa attended the meeting. NGO Awaz president Kime Yassung also addressed the gathering.
The APCC held another meeting in the afternoon at the Yazali general ground, where the people demanded immediate arrest of those involved in the multi-crore scam.