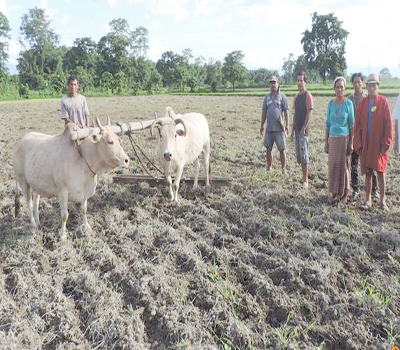 [ Prafulla Kaman ]
PASIGHAT, Aug 8: Scanty rainfall this summer has created drought-like situation in many parts of Siang valley in Arunachal Pradesh and adjoining areas of Dhemaji district in Assam, causing worry to farmers.
According to reports from Mebo sub-division in East Siang district, wet paddy cultivation at Kiyit, Borguly, Kongkul and Namsing area, which are known as the rice bowls of the Siang valley, has been adversely affected due to scanty rainfall.
The farmers, who are surviving on agricultural activities, are worried about the paddy on their croplands.
“Drought-like situation this monsoon has caused worry for many farmers as around 500 families depend on natural factors and are yet to achieve their wet cultivation as they have no mechanical irrigation facility in the paddy fields”, rued Namsing village Gaon Burah, Bohonto Perme.
“Our villagers are still looking at the sky for blessings from the rain God, but the scene is uncertain. We shall have no option other than adopting alternative farming if monsoon does not favour us this time”, said Rambilash Perme, a farmer of Borguly.
Mebo sub-division, located on the right bank of the mighty Siang River is considered to be the rice bowl of the valley and the rural population largely relies on agriculture and allied activities. Besides varieties of paddy species, the plain fertile croplands have rich potential for other cereal crops, oilseeds, vegetables, fish culture and animal farming.