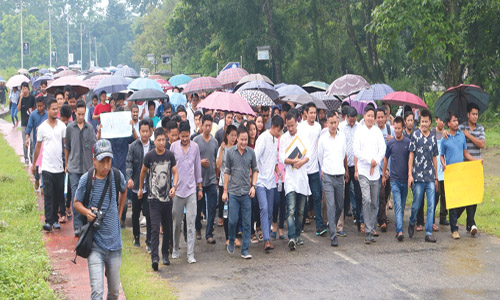 RONO HILLS, Aug 13: The Rajiv Gandhi University Students’ Union (RGUSU) and the Rajiv Gandhi University Research Scholars’ Forum (RGURSF) on Monday held a rally in the university campus to protest the delay in appointing a regular vice-chancellor (VC) and other officers at the university.
The RGU has been without a regular VC since December 2017.
The rally was also aimed at highlighting the issue of regularization of regular appointees for the offices of registrar, finance officer, controller of exam, and internal audit officer.
The RGUSU later submitted a representation to the ministry of human resource development (MHRD) through the office of acting VC Prof Mitra, which was immediately faxed to the office of the MHRD’s joint secretary.
Members of the All Arunachal Pradesh Students’ Union (AAPSU) also took part in the protest rally.
“The issue cited by the RGUSU and RGURSF concerns the future of the university and the state as a whole,” AAPSU general secretary Tobom Dai said. “Such anomalies have been seen deteriorating other higher educational institutions of the state.”
Drawing parallels between the situation in RGU and in the North Eastern Regional Institute of Science & Technology (NERIST), Dai called it a “pandemic situation.”
He said the state and the central governments “need to act before any form of rigorous democratic agitation takes place in the state.”
The student body of the NERIST had earlier agitated in a similar manner, demanding a regular director for the institution.
RGUSU president Giogi Aja said the HRD ministry “lacks conviction on looking at the university’s ground reality as observed from the prolonged delay.”
He termed the situation “a step-fatherly treatment which is leading the university to an uncontrolled place.”
“Today’s rally is just the beginning; we haven’t even involved the other stakeholders of the varsity. If the HRD ministry fails to meet our demand, we may proceed for further agitation movements, taking into confidence of all the stakeholders of the varsity,” RGUSU general secretary Vikash Dada said.
RGURSF chairman Margum Ado and general secretary Kosen Jida also highlighted the issues faced due to the lack of a full-fledged VC.
Later in the evening, Dai, who had met Chief Minister Pema Khandu in this connection, informed over the phone that the chief minister has taken serious note of the unfolding issue and given his assurance to take the matter up with the MHRD after the Independence Day celebration.
The CM has also written to Union HRD Minister Prakash Javadekar, briefing the grievance explained by the AAPSU delegation, and asked Javadekar to redress the grievance by “appointing a visionary personality as vice-chancellor of the university, on extreme priority.”