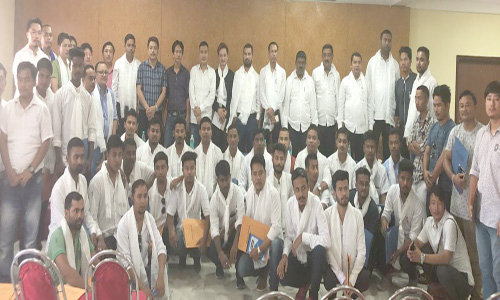 Staff Reporter
ITANAGAR, Aug 14: The All Arunachal Pradesh Students’ Union (AAPSU) on Tuesday reached out to the All Assam Students’ Union (AASU), ahead of launching its ‘Operation Clean Drive (OCD)’ in Arunachal Pradesh next Friday.
The OCD committee organized a ‘joint confidence-building meeting’ of the AAPSU and the AASU, under the chairmanship of North East Students’ Organization (NESO) coordinator Pritam Wai Sonam. More than 30 members of the AASU attended the meeting, which was headed by AASU vice-president (central) Chitra Basumatary.
Following the publication of the NRC in Assam on 30 July, it is feared that the number of illegal immigrants would increase in Arunachal. The AAPSU announced that it would launch OCD on 17 August, and has asked all illegal immigrants to leave the state. The union also appealed to fellow Indians who do not have inner line permits to obtain it within 15 days or face deportation.
OCD chairman Tatung Taga said the joint meeting on Tuesday was aimed at “building confidence between AAPSU and AASU” ahead of the drive, in view of apprehension that the drive may spark violence in Assam, targeting Arunachalees.
AASU finance secretary Krishna Das urged AAPSU members not to harass indigenous Assamese people living in Arunachal during the operation. However, he also advised Assamese people to have their documents corrected to avoid unnecessary hassling.
AASU VP Chitranjan Basumatary extended solidarity to the AAPSU in its movement against illegal immigrants and ILP violators.
“We do strongly support AAPSU’s movement to protect the indigenous people,” he said. “We do appeal NESO to pressurize every state in Northeast to come out with NRC for the safeguard of indigenous people,” he added.
Basumatary, however, urged AAPSU members to avoid causing unnecessary harassment to innocent and genuine people.
AAPSU general secretary Tobom Dai, seeking cooperation from the AASU, asserted that no genuine Indian or Assamese would be harassed by any volunteer during the drive.
“Our movement is against illegal immigrants and ILP violators. Illegal is illegal, irrespective of religion, caste and creed,” Dai said. He assured that no genuine Indian would be troubled by the volunteers.
Dai informed that the drive is being carried out in close coordination with the district administrations, the police, and the state government. He said detected violators would be handed over to the police.
“The AAPSU is doing it to protect our own indigenous people, and we will carry out the drive within the framework and provisions of the Eastern Bengal Frontier Regulation Act, 1873. We will not take the law in our own hands,” he said.
He appealed to the AASU members to spread positive information about the drive in Assam to avoid unnecessary misunderstandings, and to help their people in getting their basic documents corrected, adding that OCD would “indirectly help Assam NRC.”
Sonam told media persons that the NESO would coordinate with both the AASU and the AAPSU during the drive.
Later in the meeting, the two unions resolved to prevent from turning communal any untoward incident that may be incited by groups or persons with vested interests during the drive.
The AAPSU urged the AASU to create social awareness among the indigenous people in Assam regarding the modalities of the OCD. The unions further resolved that a helpline desk would be created by both the unions.
Meanwhile, the East Siang district units of various student unions have sought support from the district administration, the police and the people to “tackle the intruders” during the statewide ‘Operation Clean Drive’ from August 17 to 19 announced by the All Arunachal Pradesh Students’ Union (AAPSU).
The unions conveyed this during a coordination meeting convened by the administration here on Monday to deal with inner line permit (ILP) violators.
The unions said the drive would “not (be) against genuine non-locals from mainland India but a rigorous effort to detect and identify people from Bangladesh who have illegally entered into Adi-inhabited areas via Assam or other states.”
The unions urged the superintendent of police to keep strict vigil at all entry/exit points, so that infiltration is kept under control.
Acknowledging that the exercise would be challenging, Deputy Commissioner In-charge Tatdo Borang assured the participants that there would be no space for ILP violators in the district.
Noting that contractors and the farming community engage large numbers of labourers from outside the state for construction and cultivation work, the DC appealed to the people not to employ illegal persons as domestic help, construction site workers or permanent employees in any organization.
He advised the student leaders to educate the people about the threat posed by the presence of intruders and the consequences of harbouring illegal non-locals in the district.
However, Borang cautioned that the union members are not authorized to check ILP or other documents directly. He suggested that they intensify their survey to identify suspected persons living in the district, with the help of magistrates and police.
“Illegal persons would be deported outside the jurisdiction of East Siang district as per the law of the land,” he said.
SP Prashant Gautam informed that police forces have been alerted and “innumerable immigrants who failed to provide valid documents have already been deported from the district.”
The SP requested all to maintain peace and harmony in the society, and to not take the law in their hands.
The student union representatives included members of the AAPSU, the AESDSU, the ABSU (E), the AMESU, the BBSU, and the LBSU. (DIPRO)