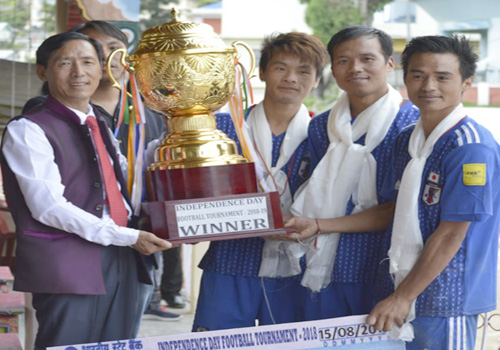 BOMDILA, Aug 17: Sera Football Club (SFC) won the Independence Day Football Tournament, beating Bomdila Football Club 2-1 in the final match at Buddha Stadium here on Wednesday.
SFC took and early lead in the keenly contested match with a goal from Rinchen Dorjee Karma. BFC restored the parity just before the end of halftime. The equalizer was scored by Dorjee Khandu Wangja.
The score remained 1-1 at halftime.
The second half saw both the teams attacking, but it was Kalu of SFC who curled in a free kick, which turned out to be the match winner.
SFC walked away with a cash prize of Rs 1 lakh along with the trophy, while the runner-up team BFC was awarded Rs 50,000.
The award for ‘best player’ of the tournament went to Sangjee Kali of SFC. Lham Norbu of the same team was adjudged the ‘best goalkeeper’.
Earlier, addressing the players, former president of Sajolang Elite Society Aju Khonjuju advised them to maintain discipline both on and off the field.
He said winning and losing are the parts of any game, but what matters more is participation.
He also announced to carpet Buddha Stadium with artificial grass.
All West Kameng Students’ Union (AWKSU) general secretary Lashi Khandusow also spoke.
The tournament was organized by the AWKSU in collaboration with West Kameng District Sports Association.