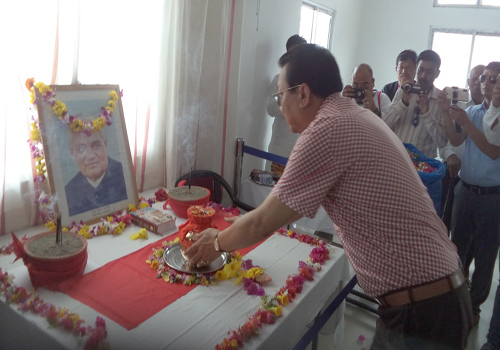 ITANAGAR, Aug 24: The ashes of former prime minister Atal Bihari Vajpayee were immersed at Parsuram Kund, the holy place in Lohit district of Arunachal Pradesh, on Friday.
As the Sky One chopper carrying the urn containing the ashes of Vajpaee landed at the helipad near the kund, thousands of people gathered to pay homage to their beloved leader. A full guard of honour was also presented in the helipad.
Deputy Chief Minister Chowna Mein, accompanied by Art & Culture Minister Dr Mohesh Chai, state BJP president Tapir Gao and general secretary Jarpum Gamlin, along with civil and police officials immersed the ashes in the kund after performing puja.
An all-religion prayer was also organised at the venue before immersion of the ashes.
Earlier, the urn containing the ashes was kept at the advanced landing ground in Pasighat for half-an-hour for public viewing.
Recalling the contribution of Vajpayee to the Northeast, Mein said that during his (Vajpayee) tenure as the prime minister, a special package was prepared for the region.
“His contribution to Northeast was immense, which is now evident in the region, be it in the form of Pradhan Mantri Gram Sadak Yojana or in the science and technology sector,” Mein said, adding that all the politicians should follow Vajpayee’s principles and ideology.
Remembering the days spent with the former prime minister, Gao said Vajpayee was an inspiration for all and a disciplined person.
“Whenever I met him, he used to ask me about Arunachal, though at that time we had no BJP government in the state. He used to motivate us to continue to work for the people,” Gao added.
On Thursday, Gao brought the ashes from New Delhi, which was then kept at the party office before it was taken to the Dorjee Khandu Convention Hall here for public viewing. (PTI)