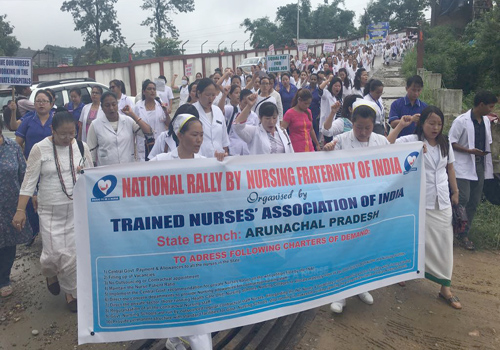 ITANAGAR, Aug 24: The state branch of the Trained Nurses’ Association of India (TNAI) staged a march from Akashdeep to Indira Gandhi Park here on Thursday as part of the nationwide rally of the nursing fraternity of India under the TNAI.
Joined by over 300 senior nurses, representatives of the district units, and students in training, state TNAI president KT Yasung spoke about the demands of the nurses across the state and the country, and about how the government has been denying the nursing community its due rights.
While the foremost demand of the nurses is for central government payment and allowances to all the nurses in the state, they strongly demanded that the vacancies which have been lying since 1960-70 be filled up at the earliest.
Yasung informed that there are four nursing cadres of the state, and that there are vacancies in them because the state government has not created any posts yet and instead outsources or gives out contractual appointments.
“No posts apart from contractual or staff nurse have been created by the state government. This causes stagnation, and many have retired from their jobs without a single promotion. We want those vacancies to be filled up,” she said.
Highlighting the low pay scale of private nurses, she cited the 2016 writ petition submitted by the TNAI in the Supreme Court. According to the verdict of the apex court, all state governments have to direct private health institutes to make it mandatory to pay their nurses at par with the salary of government nurses.
“The verdict was issued for all states, but the Arunachal Pradesh government is yet to implement it. Private-hospital nurses have the same qualifications as government nurses and are doing equal amount of work,” Yasung said.
She also highlighted that many nurses are overburdened, and demanded that hospitals maintain the nurse-patient ratio.
“As per norms of the Indian Nursing Council (INC), a nurse on general duty is supposed to look after six patients, while the nurse-patient ratio in OT, emergency room and labour room is 1:1,” she informed.
The nurses also urged the government to direct those in the private sector who are running health care units, nursing schools, and nursing colleges, to allocate maternity and study leave as per government rules for staff nurses and nursing faculties.
“As per government rules, government nurses are allowed six months of maternity leave. The same should apply to nurses of all categories working in the private sector,” said Yasung.
Regarding government nursing schools run by outsourced regular or contractual staff nurses, she said this was in total disregard of the INC norms and guidelines.
The state TNAI also called for providing a permanent structure with standard facilities for the nursing school, and to stop its operation from a makeshift building in ignorance of the prerequisite criteria of the INC.
“The INC may ban the state nursing school if the basic needs of the institute are not fulfilled. The Arunachal government is ignoring the nursing school. If there are no nurses, how will hospitals run?” Yasung said.
The state TNAI also sought a separate and full-fledged nursing directorate to look after the nursing community, besides nursing and uniform allowances.
On the two male nurses who were in the rally, Yasung said there is a lack of awareness on the importance of male nurses in the state.
“They play a critical role, especially in OTs and emergencies. We require more male nurses,” she said.
Nurses in training at the Arunachal State Nursing School, Zyon Nursing School, Nirjuli, RK Mission Hospital, and the Lekhi village BSc Nursing College also joined the rally.