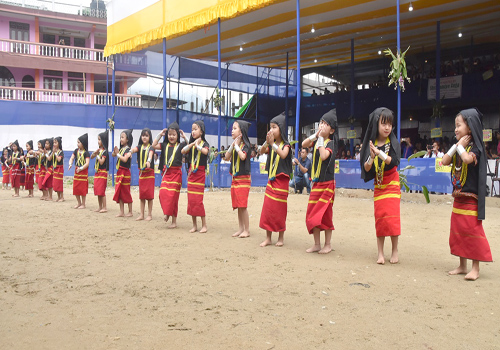 ITANAGAR, Sep 1: Solung, the most famous and agro-based festival of the Adi community, was celebrated with traditional pomp and gaiety across Arunachal Pradesh on Saturday.
Attending the celebration here, Deputy Chief Minister Chowna Mein called upon the people of the state to keep their rich cultures, languages and literature alive.
“Protection of our culture, customs and languages is our own responsibility and we cannot expect some other persons to do it for us,” Mein said.
The DCM said the government is making every effort to help the indigenous people in preserving and promoting the rich cultural heritage of the state.
“In this direction, the government has created the department of cultural affairs last year and also kept fund provisions in this year’s budget for many projects, such as Rs 1 crore for a research and documentation programme in partnership with RGU to capture tangible and intangible cultural heritage of the state; Rs 5 crore for establishment of a digital museum in Itanagar by the research department; and Rs 10 crore for establishment of a heritage village in Itanagar for showcasing the diverse cultures of the state,” he said.
Mein lauded the Adi community as being one of the most democratic and secular societies. “Because of this democratic and secular setup, the Adi society can adapt any community among their society,” he said.
He added: “A festival is the mirror of the society and it is the occasion for spreading the message of brotherhood, unity and peace and happiness with one another. A festival should also be the training ground for upcoming generations for learning the rituals, traditions and culture.”
Dhemaji (Assam) MLA Ranuj Pegu spoke on the common origin, age-old cultural linkage and similarities between the Adis and the Misings in particular and the Tani clan as a whole.
“The rich cultural heritage of the state needs to be preserved through structural documentation,” he said, and suggested establishing a mythological park or an anthropological park in Arunachal Pradesh for showcasing the diverse cultures of the state to the outside world.
Celebration committee president Getom Borang highlighted the mythology and origin of Solung festival. Mising Baane Kebang president Paramananda Chayengia, and Deputy Speaker Tumke Bagra also spoke.
Earlier, Mein inaugurated the festival by performing a ritual called Taku-Tabat at the festival altar, which was followed by the Solung anthem. He also released the annual Solung souvenir Digok Roli.
Folk dances and Solung yokyang (tug-of-war) were other attractions of the celebration.
Among others, state BJP president Tapir Gao and Dambuk MLA Gum Tayeng attended the celebration.
Our Ruksin correspondent adds: The Adi community of Siang valley celebrated Solung with traditional pomp and gaiety.
Attending the celebration at Ngorlung village in East Siang district, East Arunachal MP Ninong Ering urged the community’s people to preserve their ancestral culture to keep their ethnic identity intact.
He said the central government has taken steps to promote and preserve the cultural heritage and diversity of the tribal groups of Northeast India.
Pasighat West MLA Tatung Jamoh urged the Adi youths to shoulder the responsibility of preserving their unique culture for the future generations, while retired secondary education director Tapang Taloh said the festive celebration brings unity and peace among the societies.
In Depi Moli village, public leader Karto Kaye said Solung festival showcases the rich customs and faiths of the Northeast region.
Stating that agriculture-based festivals celebrated by different tribal groups of the Northeast have the same motto and objectives, Kaye said, “One particular tribe should not be confined to their own faith and belief but should mingle and help other tribes of the state to develop equally.”
Among others, public leaders of the area, including Gamdo Bojen, Taja Jamoh, Bedo Ete and Marpak Riba, and Depi gaon burah Nonang Eko spoke, and urged the youths to work for the promotion of their ancestral culture.
Solung festival was also celebrated in Pasighat, Mebo, Yagrung, Sille-Oyan and Bilat areas of the district, besides in Siang, Lower Dibang Valley and Namsai districts. (With input from DCM media cell)