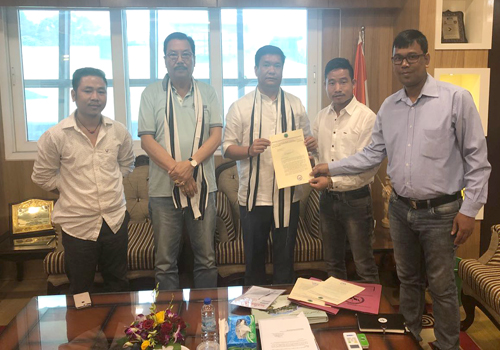 ITANAGAR, Sep 3: Chief Minister Pema Khandu has assured the Arunachal Pradesh Union of Working Journalists (APUWJ) that his government would look into the union’s demand for press reforms to promote a free-thinking society.
The CM gave the assurance when an APUWJ team led by its President Amar Sangno called on him at his office here on Monday and urged the state government to enact the Working Journalists’ Protection (WJP) Act.
Presently, Maharashtra is the only state in India where an act to protect the rights of working journalists has been passed.
“Journalists in Arunachal Pradesh often face intimidating situations involving various communities and organisations. Hence, the APUWJ strongly feels that the enactment of the WJP Act would ensure the safety of all scribes,” Sangno told the CM.
The union is also demanding introduction of a pension scheme for working journalists.
The APUWJ president told the chief minister that the state governments of Assam, Tripura, and Haryana have implemented pension schemes for journalists who have retired from their profession.
“It is only fair, under such circumstances, that journalists who have served the public should be rewarded after long years of service,” Sangno opined.
Besides these, the union is demanding exemption from toll and parking taxes, on the ground that journalists often have to park their vehicles while performing their duties, and have to pay heavy parking fees almost every day.
Implementation of the Majithia Wage Board recommendations and accommodation for accredited journalists at government guest houses are the union’s other demands.
“It has been more than ten years since the formation of the Majithia Wage Board and the Supreme Court ruling in favour of the recommendations made by the board; but a majority of journalists under the wage board is yet to receive benefits,” Sangno said.
“Also, the oft-repeated promise of providing accommodation to accredited journalists at government guest houses has never materialized,” he added.
Pema on his part assured to look into the demands placed by the union. However, he said that the demand for implementation of the Majithia Wage Board recommendations may take some time, considering its technical ramifications.
Sangno also drew the attention of the state government towards the increasing curbs on the freedom of press, through covert and overt measures, by the central and some state governments.
Earlier, on 1 September, the journalists under the aegis of the APUWJ took out a massive protest rally from Akashdeep to the Arunachal Press Club here, demanding protection of the rights of the media.
On the same day, thousands of journalists all over the country also staged demonstrations and dharnas to support the call of the Indian Journalists’ Union against atrocities meted out to journalists and media houses, the killing of journalists, and intolerance of the central and state governments.
Meanwhile, the APUWJ on behalf of the working journalists of the state expressed gratitude to the Pema-led BJP government for enhancing the journalists’ welfare fund-cum-corpus fund from Rs 1 crore to Rs 2 crore.
Deputy Chief Minister Chowna Mein and Arunachal Electronic Media Association President Mukul Pathak, and APUWJ member Taya Bagang were also present at the meeting.