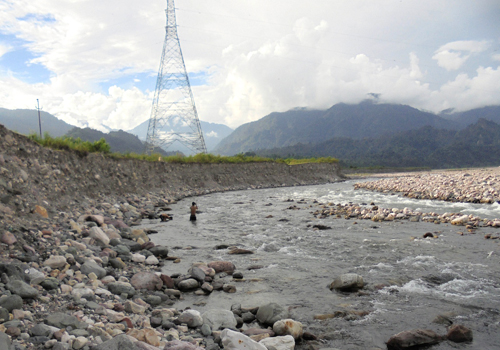 [ Prafulla Kaman ]
ITANAGAR, Sep 4: Concerned at the unprecedented situation in the Siang river basin where certain areas are facing drought-like situation while others are reeling under floods, Chief Minister Pema Khandu on Tuesday sought to draw the attention of the union home ministry to the situation.
In a letter to Union Home Minister Rajnath Singh, Pema called for an inter-ministerial team to assess the situation “for further needful action and precautionary measures.”
He informed Singh about the reports of the Siang river flowing above the danger level. He said many houses have been eroded and washed out under the impact of gushing floodwater. “The sudden rise in the water level and muddy water flowing in the river is causing concern amongst the locals,” he added.
In a contrasting development, the chief minister said, many areas of Namsing, Mer, Gadum, Gadum-II, Kongkul and Seram villages in East Siang district, areas of Siang and Upper Siang districts, and parts of Lower Dibang Valley district are facing a drought-like situation, causing untold miseries, including loss of crops.
He requested the home ministry to depute an inter-ministerial team to visit the flood- and drought-affected areas of the state in order to form a clearer picture and take up remedial measures immediately.
Meanwhile, massive erosion by the Siang river has rendered at least 10 families homeless in Serum village in Mebo circle of East Siang district.
In the last couple of months the river has wiped away several acres of grassland in Sigar, Borguli, Srum, Namsing, and Mer villages on its left bank.
Further, erosion by a turbulent Sike river, which flows between Ayeng and Mebo, is posing a threat to the 132 kv electrical transmission line pole on the right bank of the river.
It is pertinent to mention here that for several consecutive years overflowing water of the river has washed away the right abutment of the RCC bridge over the Siku river, disrupting road communication along NH-515.
Mebo MLA Lombo Tayeng on Monday visited the erosion affected sites. He informed that the chief minister has already been apprised of the “alarming situation,” and that he has requested the CM to take up anti-erosion measures to control the river erosion in Mebo area.
“I have informed the chief minister about the situation and urged him to send a ministerial team to visit the area to assess the properties lost or damaged due to erosion,” Tayeng said.
The MLA distributed immediate relief of Rs 50,000 and CGI sheets among the affected families. He assured them that he would take up with the competent authority for providing more assistance under the state’s disaster relief fund for procurement of housing materials. (With input from CMO)