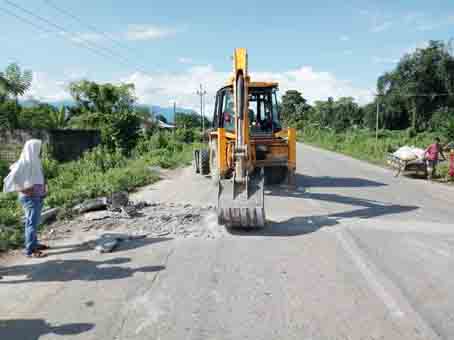 PASIGHAT, Sept 6: The East Siang district administration has removed several unauthorized speed breakers from the stretch of NH-13 in between Ruksin and Mebo.
Out of 33 speed breakers constructed on NH-13, nine were removed by the administration on Thursday. According to PWD Highway AE Jacob Siram, there was public resistance at Rani and Sille villages during the process of removing the speed breakers but the drive resumed following the Ruksin ADC’s intervention.
Following several complaints by student unions and local citizens about construction of unauthorized speed breakers by the villagers, the administration took the initiative to remove them, after holding consultations with stakeholders including GBs and the village secretaries of Sille, Oyan, Rani, and Berung.