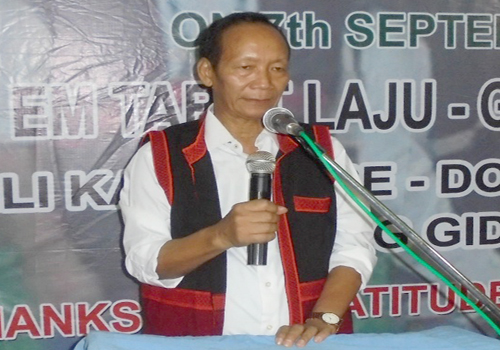 Correspondent
NARI-SEREN, Sep 8: Nari-Koyu MLA Kento Rina has appealed to the people of both Arunachal Pradesh and Assam to coexist peacefully in the interstate boundary areas.
Attending the Solung festival celebration at Nari town in Lower Siang district (bordering Dhemaji in Assam) on Friday night, Rina opined that festival celebration “provides a platform to exchange ideas and promote better understanding among the people of different communities.”
He urged the youths to shoulder the responsibility to preserve their ancestral beliefs and cultures in order to keep their ethnic identity intact.
Saying that the people of Arunachal have been maintaining cordial relationship with the people of Assam for the last several decades, the MLA requested the people of both the states to upkeep the age-old cordial relations along the boundary areas.
“Any group clash or incident at the boundary area should never be given a communal colour,” he said, adding that the Arunachalees prefer negotiation to solve any dispute with their Assam counterparts.
Informing that the Arunachal government is accelerating road development and telecommunication in the area “on priority basis,” Rina urged Chief Minister Pema Khandu to visit Nari-Koyu area (bordering Jonai in Assam) and take stock of the problems faced by the people there. He also urged government officers to work with dedication for the welfare of the common people.
Nari ADC Bani Lego in his address said, “The ethos of Solung festivities should not be confined to the Adi tribe; it should be universally observed and adopted by other ethnic tribes too.”