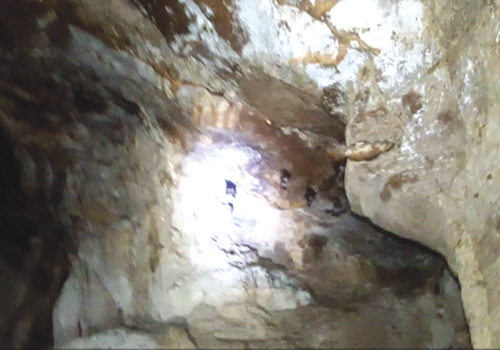 [ Gijum Tali ]
Penru, a hibernation roost for bats near Larmuk Potom village, 9 km away from Darak Circle in West Siang district is one of the largest and deepest. Though such roosts are located in many places like Poyom, Kunuyami and other villages, this roost, caved deep in the rocky hillock near Larmuk Potom is famous because of the huge number of bats.
It is said that in earlier times, the bats often dropped into houses in plenty. These bats were seen at their playful best in large numbers just after sunset from the month of March to October. It was complete hibernation in winter as few bats were seen flying around, perhaps for food.
Though the population of the bats has dwindled drastically over the years, Penru at Larmuk Potom still shelters a quite a number of them.
The recent visit to Penru was a trip down memory lane; nostalgic childhood memories of playing with bats with bamboo sticks. Many bats were killed and brought home.
Interestingly, we measured our calibre on the basis of the number of bats killed by each child. As children, we knew nothing about love for animals and birds and derived pleasure from playing with the lives of playful bats. These bats used to loom large after sunset when flying insects came out from the holes in the ground in large numbers after a few days of rainfall. The evening sky was crowded with flies and bats and that was the moment children would venture out to interfere in the predator-prey war.
Sadly, rare species and rich varieties of wild life have diminished from our ecosystem to dislodge the balance of nature. Deforestation in large scale in the name of jhum cultivation for sustenance, logs for infrastructure and fire wood for domestic uses have destroyed the natural homes of the animals and birds. But then, we still have places of interests associated with tribal myths nestled in the bosom of nature in utter solitude.
What we want today is ecotourism to unearth such places of interests and open up trekking to promote adventure tourism in the countryside too. We have enough wayside amenities in the name of promoting tourism, but such assets are kept unused, turning into places of nuisance and made to rot, barring few resorts like PP tourist guest house on the left bank of the Yomgo River at Aalo, and a few others.
The tiny Darak circle offers one such potential walking trek touching Benji Liine through the proposed Yordi Rube Subse Wild Life Sanctuary, Penru, Bebe Liine and as we transcend down, it is a two-hour drive to visit Topo Gone and Sirurijo under Yomcha Subdivision.
The department of tourism should have imaginative blueprint to explore the places of tourist interest in the countryside too.
The ambitious schemes placed by the Aalo Forest Division at Bahadur Hill and right Banks of Yomgo at Paya village is an encouraging trend towards promotion of ecotourism to open up adventurous tourism avenues for domestic and foreign tourists who love to trek. Today health conscious people want open spaces to trek and fresh air away from the dust and smoke of the towns. (The writer is District information & Public Relation officer presently posted at West Siang district)