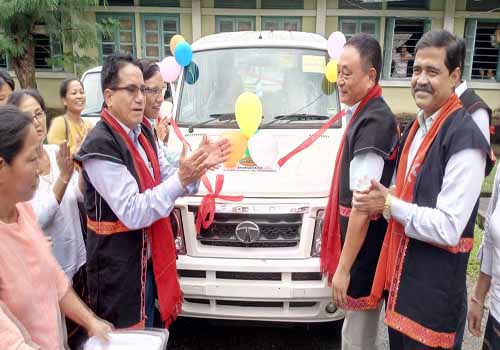 PASIGHAT, Sep 14: The Indian Oil Corporation (IOC) has donated a Tata Sumo vehicle to the Women Against Social Evils (WASE) in recognition of their fight against drug abuse in East Siang district.
The vehicle was handed over by MP Ninong Ering on Friday, in the presence of IOC deputy general manager Diganta Thakuria, East Siang DC Tamiyo Tatak, Food & Civil Supplies Director Liyon Borang, ADC Tatdo Borang, and members of the WASE.
Earlier, in an interactive meeting held in the DC’s conference hall, Ering appreciated the untiring efforts of the WASE team and said “they have set an example for the entire state and the nation as a whole.
“Easy availability and accessibility to drugs in the Northeast region is a big threat to the new generation,” he said.
The MP informed that he had requested the union petroleum minister to provide a vehicle for the WASE, and one auditorium for the government higher secondary school in Ruksin, “for which Rs 1 crore has been released by IOC, and the construction work has already started under the corporate social responsibility (CSR) scheme.”
The DC asked the IOC officials to provide two ambulances, for the Bakin Pertin General Hospital and the Ruksin CHC, and a bus for the WASE team, under its CSR scheme.
WASE general secretary Joya Tasung Moyong said the organization would continue to fight social evils in order to make Pasighat a better place to live in. (DIPRO)