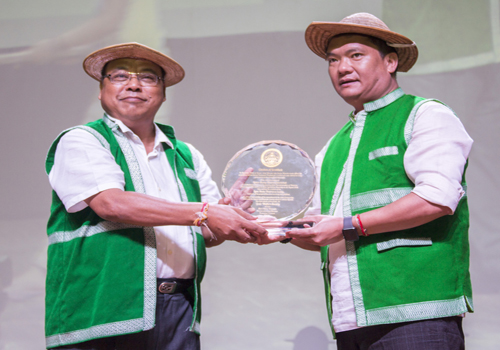 ITANAGAR, Sep 22: Chief Minister Pema Khandu was honoured by the Galo Welfare Society (GWS) at the Dorjee Khandu Convention Centre here on Friday for his contribution towards functionalization of Lower Siang district and creation of Lepa Rada district.
Deputy Speaker Tumke Bagra on behalf of the GWS presented the CM with a ‘citation of gratitude’. The citation remembered former chief minister Dorjee Khandu, who had made the commitment for the creation of Lepa Rada in December 2008.
The GWS expressed appreciation for Pema’s commitment to the Galo community, and for standing in solidarity with the aspirations of its people.
The CM in his speech said the creation of the districts was part of the ongoing developmental initiatives taken up by his government “under the leadership of Prime Minister Narendra Modi at the Centre, so that the fruits of development reach every nook and corner.”
Underscoring the importance of selfless devotion by leaders for the development of the state, Pema said “a leader must not cling to the post and should be able to sacrifice his position if it is required for the greater interest of the people.”
He added: “As we celebrate the creation of two districts, the real happiness will come only when we are able to make it stand on its own feet. Maybe after ten years, when these districts are able to perform, then we can call for actual celebration, and that is when we may recall with pride the contribution of the Team Arunachal government.”
He assured to provide all support and funding for successful functioning of the two districts.
MoS for Home Kiren Rijiju, who also attended the function, said he himself had, while touring the length and breadth of the vast undivided West Siang district, “always felt that it was a kind of injustice to the people of the area not being granted their demand of district reorganization.”
Rijiju also assured of his full cooperation for the development of the newly-created districts.
Expressing the gratitude of the Galo people to the state Government, Tourism Minister Jarkar Gamlin requested the CM to “provide further support from the government, so that the newly-created districts could be developed into model districts.”
The GWS members also appreciated Pema for awarding the bravery award to late DySP Bomto Kamdak; establishment of the Tomo Riba Institute of Health & Medical Sciences; opening of the Jomde Kena Memorial College in Lower Siang district; establishment of the Staff Selection Board; and the creation of the department of indigenous affairs.
Organizing committee chairman Tomo Basar, GWS president JM Boje, and GWS secretary Dr Minge Loyi also spoke.
The programme was attended by cabinet ministers, MLAs, the legislative assembly speaker, and a host of other dignitaries including Member of Parliament Ninong Ering, commissioners, secretaries and directors of various departments, and about 2500 members of the GWS from various districts. (CMO)