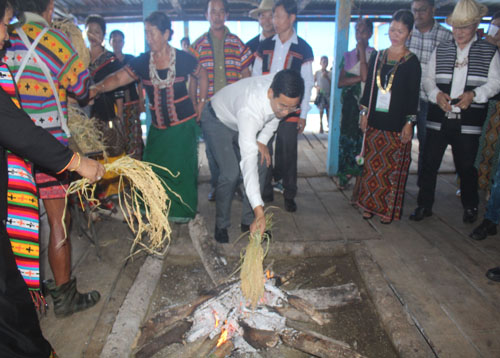 [ Karyir Riba ]
DAMBUK, Sep 24: Sports & Youth Affairs Minister Dr Mohesh Chai called upon the people of the state to preserve their own languages for posterity.
“Our languages are gifts from our ancestors, and it is our duty and responsibility to hand them down to the younger generations,” said Dr Chai after inaugurating the central Keh-meh-ha festival celebration here in Lower Dibang Valley district on Monday.
He urged the elders to encourage the young to speak and adopt their mother tongues to communicate in the society.
“Modernization and westernization are okay; but it should not be at the cost of one’s own culture, traditions and language,” Dr Chai said.
“Many tribes, like the Galo, Apatani and Adi, have introduced their language as third language in schools in their respective areas long ago. We should follow suit in order to preserve and promote our language,” he said.
He also advised the youths to abstain from drugs and substance abuse.
“Work hard, do something good for your society, which will make everyone proud,” he said.
Highlighting various government schemes, including the recently launched CMAAY, Dr Chai urged the people to avail the benefits of these schemes.
Hayuliang MLA Dasanglu Pul wished everyone a good harvest.
“When most of the festivals are celebrated to seek blessings from god, Keh-meh-ha is celebrated to thank god for all we have been given,” she said.
Dambuk MLA Gum Tayeng said festivals offer “a platform to showcase one’s own culture and traditions, share happiness, and foster unity and the sense of oneness.”
The Keh-meh-ha mythology was read out by Hiju Menjo. Former ASM Sirang Kolom Mepo also spoke.
Cultural displays and a performance by budding singer Michael Migri were the highlights of the celebration.
Prizes for sports and literary events conducted as part of the festival were also given away during the celebration. The literary competition was conducted by the AIMSU, while the sports competition was conducted by the Naba Ita Pulu Indoor Stadium Committee.
Rajya Sabha Member Mukut Mithi, local MLA Mutchu Mithi, former MP Laeta Umbrey, Deputy Commissioner Mitali Namchoom, and the Dambuk ADC also joined the festival, along with members of the Cultural and Literary Society of Mishmi and the Idu-Mishmi Cultural and Literary Society, GBs, and others.