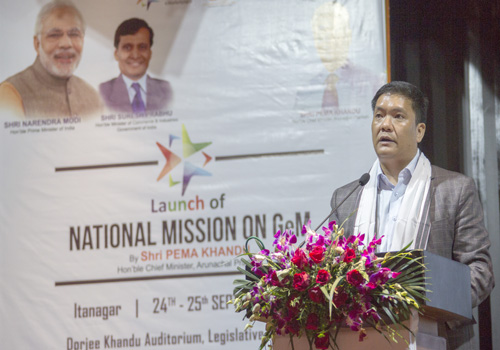 ITANAGAR, Sep 24: Chief Minister Pema Khandu launched the nationwide mission for promotion of the Government e-Marketplace (GeM) at the Dorjee Khandu auditorium in the legislative assembly complex here on Monday.
In his address, the CM said over 26,000 government agencies have been incorporated in the GeM, “including above 1 lakh onboard, with more than Rs 10,500 crore transactions having taken place so far in the country, which is a big achievement.”
The GeM is aimed at bringing in more transparency in government procurement, and accelerating the adoption and use of GeM by state governments and their agencies, he said.
Informing that Arunachal is the sixth state in India to have signed MoUs with the GeM, Pema said the national drive from 6 September to 15 October is aimed at creating awareness about GeM, training buyers and sellers, getting them registered in GeM, and increasing procurement through GeM.
“With the adoption of Arunachal Pradesh Staff Selection Board and GeM, the officers and employees of the government departments will be relieved from recruitment and procurement activity taking away excessive work pressure from them,” the CM said.
He said the commerce ministry has rolled out the state export strategy for creating export infrastructure with 80% subsidy for the Northeast states, “which is aimed at benefiting the farmers of the state.”
He also informed that work on the Rs 1,700 crore project sanctioned by the communications ministry to improve digital connectivity in the state “is already underway.” (CMO)