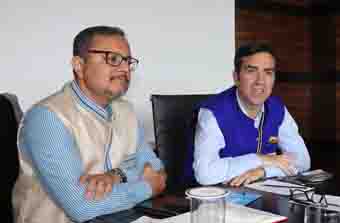 Staff Reporter
ITANAGAR, Sep 27: British Council (BC) in India Director Alan Gemmel, OBE called on Chief Minister Pema Khandu here on Thursday to discuss modalities for extending its service towards training teachers and students in the English language in the state.
Gemmel  informed that the BC, which is celebrating 70 years of its service in India, is also getting into an agreement through an MoU with the North Eastern Council (NEC) in a week, which would allow the BC to train teachers in the English language in the Northeast.
Pema said the state government “is looking forward to the council’s expertise in teaching English, which would improve the soft skills of students and give them the edge for employability.”
He also requested the BC to support the youths of the state in the fields of education, music, culture, and sports.
Earlier, addressing a press conference here, Gemmel informed that the BC has offered scholarships to 500 Indian students for academic exchange programmes in 44 UK universities this year.
He informed so far 105 women from India, including six from the Northeast, have already received scholarships from the council to study at universities in the UK.
“We are hopeful that more students from Arunachal and other states of the Northeast will avail the scholarships being provided by the council,” said Gemmel.
He also informed that the council is planning to organise a conclave of the education minister’s of the Northeast in New Delhi soon, in partnership with the NEC, and expressed hope that it would provide a platform for the education ministers to discuss issues related to the education sector and find out solutions.
The BC director also informed that the council has been trying to promote artists from the Northeast, and in this direction a music video album was created where 12 artists from the Northeast, including Tashi Lama from Arunachal, performed.
He said the BC has also created an app, ‘Mix the City’ on Google Playstore, on which anyone can create music with the 12 artists.
Also, as part of the council’s 70 years in India, the BC is sponsoring Nubya Garcia, a London-based saxophonist and composer, who will be performing at the Ziro Festival of Music (ZFM).
This is the first time that the British Council has presented a UK artist at the ZFM.