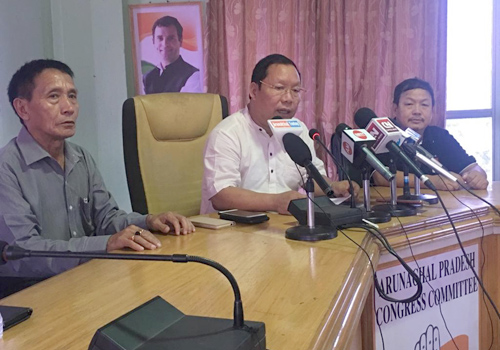 Staff Reporter
ITANAGAR, Oct 1: The Arunachal Pradesh Congress Committee (APCC) berated the Pema Khandu-led BJP government and announced that it would begin a series of movements against the “unethical, undemocratic and high-level corruption taking place in the state” under the current leadership.
Addressing reporters at Rajiv Gandhi Bhavan here on Monday, APCC president Takam Sanjoy said the party is going to begin a movement against serious issues concerning the state immediately after its rally to mark the birth anniversary of Mahatma Gandhi on 2 October.
Sanjoy said the INC has already prepared its own charge-sheet highlighting various issues.
He expressed apprehension that the state government does not have money to release salaries of next two to three months.
“This government is bankrupt and not functioning. The only option left is to gherao the illegally appointed government which is maroing the money of the people,” Sanjoy said, and cited various instances of siphoning off of money from large-scale projects.
He cited the Sangte village land compensation scam in Dirang circle of West Kameng district (a Rs 29-crore project for establishing an ITBP battalion); the job-for-cash scam for recruitment to 200 posts under the municipality; and the over Rs 200 crore Trans-Arunachal Highway land compensation scam (Joram-Koloriang and Poptin-Bopi roads).
Sanjoy said the Congress has written to the Central Bureau of Investigation (CBI) regarding the TAH compensation scam and, as a follow-up, to the union minister of road, transport & highways (MoRTH) to get it investigated by the CBI.
“If the ministry fails to get the CBI to take up the case, the MoRTH will also be considered to be involved in the scam,” Sanjoy said.
He also said that the officers are made scapegoats in all such scams.
“Officers alone should not be made scapegoats. The CM, the MLAs, and the entire gamut of administration are responsible for such corruption,” Sanjoy said.
On the misuse of the Rs 200-crore untied fund of 2017-’18, the Congress chief said the party would take the matter to the high court.
“The untied fund was eaten up by the BJP members in connivance with the administrators,” Sanjoy claimed.
The former MP also questioned the inaction on the minors’ rape-and-murder cases in Yingkiong, Namsai, Daporijo, and Sessa, and the alleged murder of former MLA Ngurang Pinch.
He also questioned the death of school student Toko Yame in the home constituency of the chief minister, and demanded a CBI inquiry into it.
Regarding the Tibetan refugee issue, Sanjoy said the APCC seeks cross-checking of the electoral rolls, and stopping of further extension of refugee camps.
Without taking any names, he said student unions were not specific with their demands on the Tibetan refugee issue, and that the party now had to act as a pressure group, as well.
He also raised the issue of the high land revenues, fuel charges, and prices of essential commodities.
Informing that the government is currently charging land revenue of Rs 1000/sq km for Category A, Rs 500/sq km for Category B, Rs 200/sq km for Category ‘C, and Rs 100/sq km for Category D, Sanjoy said, “This is illegal and only to pocket the aam aadmi’s money.”
Earlier, Sanjoy informed that the Congress would conduct a social service on Tuesday to mark the birth anniversary of Mahatma Gandhi.
A car rally of around 250 INC members would also be flagged off from here for Palin in Kra Daadi district to spread the message of peace and unity in diversity along the way, he said.