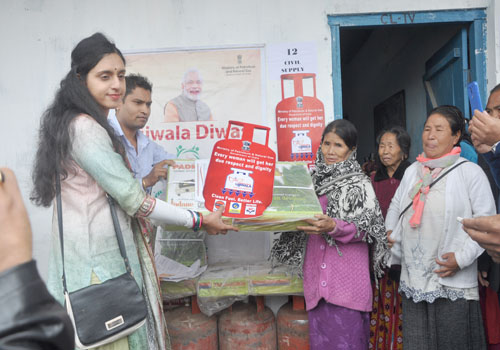 BOMDILA, Oct 3: The fourth edition of the two-day ‘Sarkar Aapke Dwar’ programme, West Kameng chapter began on Wednesday morning at Thrizino; the remotest administrative sub-division of the district.
A total of 22 departments participated on the first day from Thrizino and its adjoining villages.
Interacting with the local denizens, Deputy Commissioner Sonal Swaroop urged the villagers, especially the uneducated and elderly and the people without means and amenities, to avail the services made available at the doorstep of the people.
She also assured that the remaining villages under Thrizino administrative circle would be covered soon in the second phase after the completion of the ongoing baseline survey.
DC Sonal distributed LPG cylinders and stoves and felicitated the progressive farmers of the area, besides distributing seeds, tools and implements. She also distributed school uniforms to the school going children.
Later, the DC inaugurated two Pradhan Mantri Awaas Yojana (PMAY-Gramin) houses and dedicated it to the beneficiaries.
On the request of the school authorities of GHSS Thrizino, the DC assured to provide three sets of computers for the school. (DIPRO)