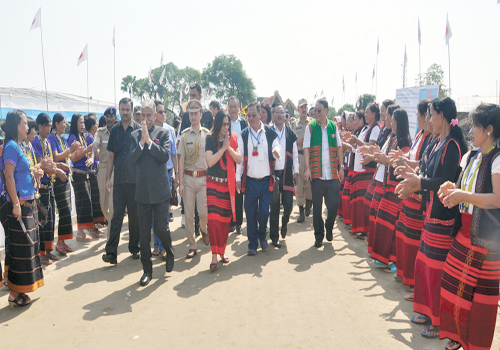 PASIGHAT, Oct 5: Governor BD Mishra inaugurated the three-day ‘Guru Diwas’ celebration – organised by the believers of indigenous faiths of the state – which began here on Friday.
The governor unveiled the 20-ft tall statue of Golgi Bote late Talom Rukbo, the ‘guru’ of the state’s indigenous faiths’ believers, and urged the gathering to carry forward the work of Rukbo “to perceive the philosophy of indigenous faiths and preserve, protect, and progress it.”
Saying that the Golgi Bote’s ideas were full of humanism, amity, and open mindedness, Mishra described Rukbo, the founder of the indigenous faiths movement in the state, as “the light of Arunachal Pradesh.”
He said, “In the best traditions of the indigenous faiths, great onus lies on the faith believers to promote all-round amity, cooperation, and coexistence in the state,” and advised the people to welcome those members of the communities “who have distanced themselves.”
Mishra suggested to the indigenous people to develop their own script in order to propagate their cultural heritage, traditions, and customs.
Indigenous Faith and Cultural Society of Arunachal Pradesh secretary Bai Taba also spoke.
Among others, ministers Nabam Rebia, Alo Libang and Tamiyo Taga, MP Ninong Ering, and MLAs Tatung Jamoh, Kaling Moyong, Olom Panyang, Lombo Tayeng, Gum Tayeng, and Tapang Taloh were present on the occasion.
People belonging to different indigenous faiths of the state, and some from neighbouring Assam, are attending the celebration. (PRO, Raj Bhavan)