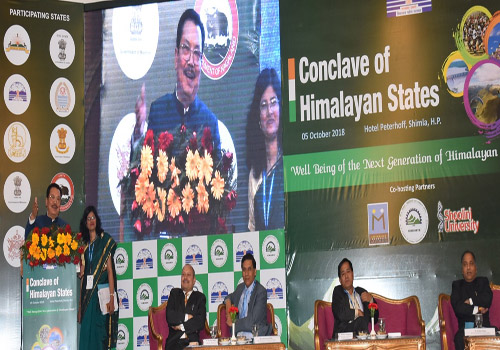 SHIMLA, Oct 5: Arunachal Pradesh Deputy Chief Minister Chowna Mein has sought a separate planning process for agriculture for the mountain states of the country.
He was speaking at the Conclave of Himalayan states on the theme ‘Wellbeing of the next generation of Himalayan people’, jointly hosted here by the Integrated Mountain Initiative, the Himachal Pradesh Council for Science, Technology & Environment, and Shoolini University on Friday.
Mein said the Centre needs to have an agriculture/planning commission to deal with agriculture planning, programming, and implementation of guidelines for the mountain states.
He advocated setting up state farmers’ commissions, saying the agriculture situations in the mountain states differ from those in the mainland.
“Each mountain state may have a state farmers’ commission to make in-depth analysis of deficiency in planning for agriculture development, gaps between resource availability and utilization, and mandated to recommend measures to address the identified issues,” he said.
Mein also proposed providing financial incentives for agricultural growth, based on ecological service, saying the mountain states are the major carbon sink in India because of the huge areas under forest cover in these states.
“The government of India or world bodies should give financial incentives to the mountain states, based on the forest cover maintained by each state, for providing alternate livelihood to farmers in place of shifting cultivation, so that the current areas under forests could be maintained or enhanced further,” Mein said.
“If mountain agriculture is to develop, certain autonomy of planning and finance to mountain states as proposed may be a prudent policy decision,” he said.
Saying that connectivity and accessibility play a major role in the economic development of the agriculture and allied sectors, he called for provision of market linkages.
The PMGSY roads play an important role in linking the rural villages and the farmlands, he said.
“Arunachal Pradesh has 6792.97 km length of PMGSY roads, but due to lack of maintenance fund by the central government, the burden has fallen on the government of Arunachal Pradesh, which is already incurring huge expenditure in the maintenance of state highways and roads frequented with floods and landslides,” Mein said.
He requested the Centre to allocate Rs 60-70 crore per annum for the maintenance of the PMGSY roads in the state.
He said Arunachal could provide “the balancing power source if the Centre favours some special dispensations” for the various hydropower projects being developed in the state.
He said that in order to harness the 58,160 mw power potential of the state – which constitutes 39% of the total hydropower potential assessed in the country – “necessary changes in the Centre’s energy policy are the need of the hour.”