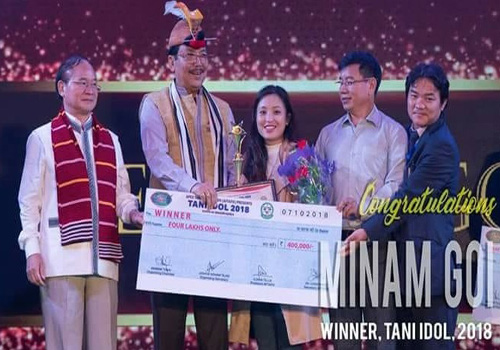 ITANAGAR, Oct 8: Deputy Chief Minister Chowna Mein said the state government has undertaken several initiatives and instituted policy measures to preserve, develop, promote, and protect the age-old indigenous culture, arts, languages, folklores, and music of the state.
He said this during the grand finale of Tani Idol – 2018, a singing competition organised by the Arunachal Pradesh Apex Tani Foundation (APATF), at IG Park here on Sunday night.
“Arunachal Pradesh has witnessed a cultural revolution which has brought lots of improvement and changes in the traditional dance forms, folklores and songs of the state,” Mein said.
“There was a time when there was no exposure or any scope for our people to showcase their talents, but today the state has made tremendous progress, and this can be seen in the form of lots of mega shows and events being organised in the state to provide them with the platform to showcase their hidden talents,” he said.
The DCM said the state government is committed to ensuring the welfare of the talented youths of the state.
“The government has kept provisions to support and promote talented youths in the field of academics, sports, art and culture, etc,” he said, and lauded the APATF for organising the event to promote and integrate the feeling of brotherhood and communal harmony among the Tani clans.
Former CM and Sagalee MLA Nabam Tuki along with several others also addressed the function.
Music aficionados turned up in large numbers to support their top 5 finalists – Ram Tagang, Binod Pegu, Meenam Goi, Marpi Bam, and Devokanta Taid – who were judged by celebrity singers Jeli Kaye, John Sonam, and Hage Komo, and guest judges, RGU Assistant Professor T Bannerjee and Assam-based singer Beauty Panyang.
Meenam Goi from Siang district took home the coveted title of Tani Idol – 2018, along with a cash prize of Rs 4 lakhs and an album contract. Binod Pegu from Assam was adjudged the runner-up and took home a cash award of Rs 2 lakhs and an album contract. The awards were given away by Mein. (PRO, DCM)