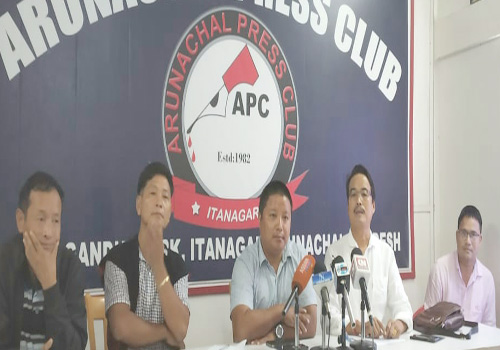 ITANAGAR, Oct 8: Reacting to the allegations of nepotism and corrupt practices levelled against Power Minister Tamiyo Taga, his son Taging Taga on Monday demanded that the Rumgong Intellectual Forum (RIF) prove its allegations within 10 days, or face a defamation suit.
Members of the RIF had earlier in a press conference alleged that the power minister had misused his position and awarded 26 projects in Rumgong constituency to his son without floating any NIT.
Addressing journalists at Arunachal Press Club here, Taging said legal action may be initiated against him if the forum could prove that contract works undertaken under him in the constituency were awarded without floating NITs.
Claiming that not a single project in Rumgong constituency has been awarded to firms without floating NIT, Taging said there are several projects, each amounting to crores of rupees, which are being executed in the constituency.
“Had my father indulged in nepotism practices, those projects should have been awarded to me,” he said.
Stating that the allegations have harmed his family’s reputation, Taging said the forum should seek a public apology within 10 days, or else face a defamation suit.
Commenting on violation of the district-based entrepreneurship act, Taging said, “Since there are no firms qualified to undertake power-related projects in the constituency, it is valid that firms from other districts will participate and may also win in the NIT process.”
Meanwhile, state BJP executive member Tayek Goi claimed that there is no such forum in the constituency, and that the forum’s legal advisor, Tajing Pangkeng, was working at the behest of the Congress party and was being instigated by former INC MLA contender Talem Taboh.
Goi said the allegations were baseless and “targeted towards assassinating the image of the power minister.”