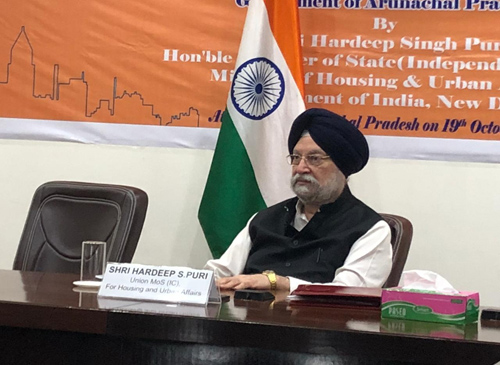 Staff Reporter
ITANAGAR, Oct 19: Union Minister of State (Independent charge) for Housing and Urban Affairs, Hardeep Singh Puri said that the landslide and flood situation of Itanagar and Pasighat would be taken into account while preparing for ‘Smart City’.
While both towns have been chosen as smart cities, the landslides and floods often trouble both towns during rainy season.
“The concerned authority at the Centre will work on those parameters to deal with natural disasters,” Puri assured, while adding, “There is no doubt that the latest technology will be available for constructing smart cities, but security, in terms of natural and manmade disasters will also be looked into”.
The MoS for Housing and Urban Affairs informed this to reporters during a press briefing, here on Friday evening on the sideline of a review meeting of all flagship programmes on housing and urban affairs.
Puri also expressed satisfaction with the status of all flagship programmes in Arunachal Pradesh as well as the entire northeast region.
Observing that Arunachal Pradesh has specific aspects as there is only one city in the state with a population of over one lakh, the MoS said, “We have to take special measures to deal with the particular geographical situation.”
Singh further expressed satisfaction on progress of flagship programmes under the Urban and Housing department and assured that whatever needful things remained in those schemes would be cleared soon during the regional review meeting.
On the Pradhan Mantri Awas Yojana (U), Rs 1 lakh is not enough for building a new house in a hilly terrain state like Arunachal Pradesh, the Minister observed and assured to look into the proposal to hike the amount for beneficiaries.