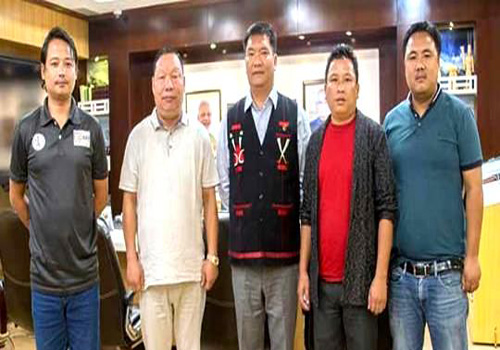 ITANAGAR, Oct 20: Arunachal Pradesh will host the final round of the Sub-Junior Boys National Football Championship, 2018 next month, informed Arunachal Pradesh Football Association (APFA) secretary Kipa Ajay.
An APFA team led by its president Takam Sanjoy on Friday called on Chief Minister Pema Khandu at his office to discuss issues related to the championship.
“It is a great opportunity for our state to host such national tournament,” said the CM during the meeting, and assured all possible help and funding from the state government to conduct the championship.
The chief minister congratulated Achom Degio, who was part of the national U-18 women’s football team, which had won the bronze medal in recently concluded SAFF Cup at Thimphu, Bhutan, for being called up again for national duties to represent U-19 football team in the upcoming AFC U-19 Women’s Championship-2020, Qualifier Round 1, 2018.
He also congratulated Roshni Ramching, Tamchi Yapi and Nabam Kamyi, who have signed for the FC Kolhapur City for the Indian Women’s League-2018 qualifiers.
Earlier, Sanjoy informed the CM about players from the state who are performing remarkably in the national and international levels.