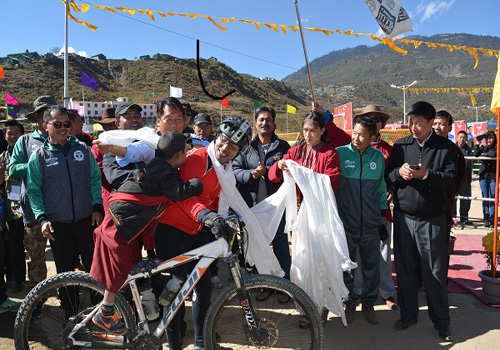 TAWANG, Oct 27: Colourful traditional dances like arpu chham, aji lhamu, ngag chham, phan chham and Yapchen Apa Yumchhen Ama were presented by villagers in the old market area here on the second day of the 6th Tawang Festival on Saturday.
Local MLA Tsering Tashi, along with DC Sang Phuntso and hundreds of tourists and locals witnessed the street carnival, which was followed by traditional games and sports like theipay and lei competition for women, pungor (shotput), lemgor (discus throw), and archery for tourists at the festival ground.
The MLA and the DC also flagged in the participants of the MTB Tawang Challenge, which had been flagged off from Itanagar on 22 October. Organised by
the youth affairs department and led by Youth Affairs Joint Director Ramesh Lingi, the team reached the festival ground here after halting at Sagalee, Seppa, Naag Mandir, Dirang, and Jang. (DIPRO)