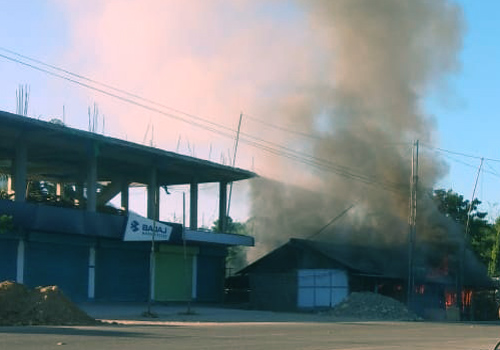 PASIGHAT, Nov 2: Five shops were gutted in a devastating fire that broke out at around 3 pm in 2 Mile area here in East Siang district on Thursday.
Fire tenders from Pasighat and neighbouring Jonai in Assam were pressed into service to douse the flames, but nothing could be saved.
The cause of the fire is not yet known. Deputy Commissioner Tamiyo Tatak said the police are conducting investigation to unearth the actual cause of the fire.
MLA Kaling Moyong expressed shock over the incident, in which an SPT building that housed five shops was completely devastated, and sought a detailed report. He urged the administration to extend all required help to the affected people.
The MLA appealed to the people to stay alert and be cautious as fire accidents occur frequently in Pasighat. He called upon the DDMA to create awareness on fire mishaps among the public.
ADC Tatdo Borang along with CO Khoda Lasa and DDMO G Tsumo visited the spot and took stock of the situation on Thursday itself. (DIPRO)