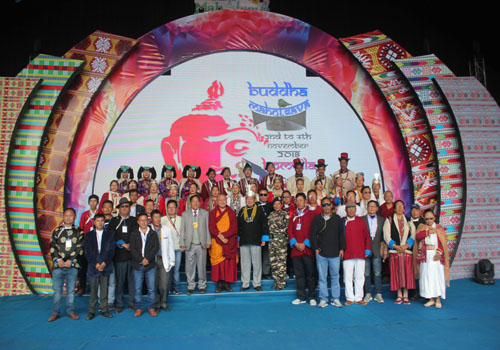 BOMDILA, Nov 2: The annual Buddha Mahotsava here in West Kameng district was inaugurated by Guru Tulku Rimpoche, the abbot of Thubchog Gatsel-Ling Monastery, at Buddha Stadium here on Friday.
Underscoring the importance and promotion of tourism in the district, Guru Tulku said events such as Buddha Mahotsava facilitate increase in the footfalls of tourists in the area.
“The peaceful coexistence of the six major tribes in the district with their distinct cultures and traditions is a remarkable trait and a harbinger of unity, peace and tranquility,” he said.
Later, he inaugurated the traditional huts of the Hrusso, Sajolang, Monpa, Bugun, Shertukpen and the Sartang communities.
He also visited the election stall, where demonstration on EVMs and VVPAT was conducted for public awareness.
Earlier, local MLA Japu Deru described Buddha Mahotsava as the right platform to showcase the rich traditions of the six major tribes inhabiting the district. It also provides a platform to budding artists of the area to showcase their talent, he said.
“In this era of modernization and influx of western culture, it becomes imperative to stay rooted to one’s culture and tradition,” Deru added.
The inaugural programme featured a performance by the Ladakhi cultural troupe, and a medley performed by artistes representing the six tribes of the district.
The three-day cultural extravaganza will witness performances by Lobsang Delek, K4Kekho with DJ Bom, Chochung Drema Thungon, Ritjima & Prakriti, Tenzin Choephel, Alar Dupak, Tsewang Lhamo, DJ No Mi, and the troupe from Ladakh. (DIPRO)