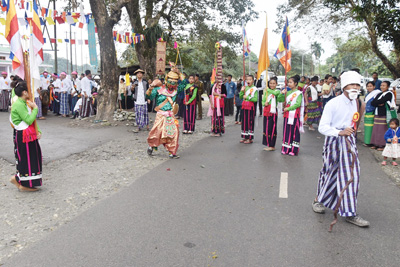 CHONGKHAM, Nov 6: People from different villages of Namsai district celebrated the first ‘combined’ Poi Potwa Panchong (Pavarana) with religious fervour and gaiety here on Tuesday.
Poi Potwa Panchong is celebrated every year by the Theravada Buddhists after the completion of three months of the ‘rainy retreat’ (varshavasa) in every village. However, the Buddhist community of Namsai, and those residing in Diyun and Miao circles of Changlang district, has decided to jointly celebrate the festival at a predetermined venue every year in rotation.
The Arunachal Pradesh Bikkhu Sangha will decide the venue of celebration.
The chief feature of the celebration is the offering of the Buddha’s statues to the monastery as a ‘dana’. Offerings in cash and kind are also made, which are used for maintaining the monastery; fulfilling the needs of the monastery’s monks; and imparting education to the children in the monasteries.
Poi Panchong (ceremonial procession carrying an image of the Buddha around the monastery), illumination of candles in the evening, and releasing ‘wish balloons’ (poi poong phai) are the other attractions of the festival.
Deputy Chief Minister Chowna Mein, MLAs Chow Tewa Mein and Chau Zingnu Namchoom, DC Tapashya Raghav and ADC Bijay Talukdar participated in the celebration amid people from all walks of life. (PRO, DCM)