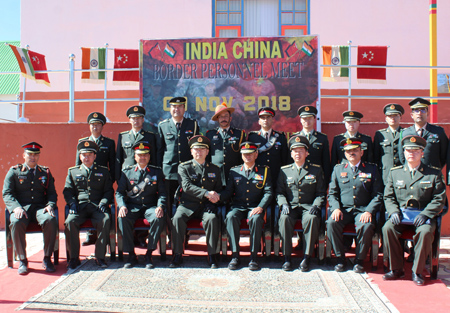 BUMLA, Nov 9: The first ever border personnel meeting (BPM) at the major general level between the Indian Army and China’s PLA was organized here by the Indian Army on Friday.
Located at an altitude of 15,000 ft and situated 42 kms north of Tawang town, Bumla is one of the five designated BPM venues between two of the world’s largest armies. The meeting was the first one to be conducted at the major general level between the two Asian giants since the inception of BPMs at Bumla in 1990.
The Indian delegation was led by Maj Gen PGK Menon as leader and Brig Zubin Bhatnagar as deputy leader, while Maj Gen Li Xi Zhong represented the Chinese army.
The meeting included hoisting of the national flags, followed by an interaction during which both sides reaffirmed their resolve to strengthen friendship and maintain peace and tranquility along the LAC.
Both the delegation leaders expressed satisfaction over the growing mutual trust and harmony between the two countries, and expressed optimism that the Sino-India relationship would grow stronger in future at all the levels. (DIPRO)