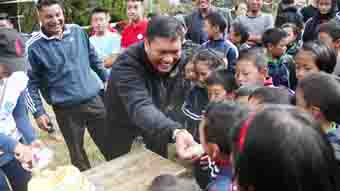 Itanagar, Nov 14: Children’s Day, the birth anniversary of Pandit Jawaharlal Nehru, the first prime minister of India was celebrated across the state with various programme including essay writing competition under the Arunachal Rising Campaign, an initiative of the State Government.
Various activities were carried out in the Capital Complex to celebrate the day with great enthusiasm.
The District Administration, Capital Complex organised the essay competition for all the Higher Secondary Schools of the Capital Complex at Govt. Middle School ESS Sector for the students of Itanagar and D Sector Middle School, Naharlagun for the students of Naharlagun. Students from more than 12 Higher Secondary schools of Capital Complex participated in the event.
The Deputy Commissioner Capital Complex Prince Dhawan hoped that such events would help bring out the best in the students. He further hoped that more such events should be conducted in various fields, giving chance to the students to showcase their talents.
The DDSE, Mallo Yam Gollo also visited the schools and gave her best wishes to the participating students.
Various cultural events, games and sports, awareness program on drug abuse were also organised in respective schools to mark the day.
Arunachal Women Helpline under the agies of OWA and one stop centre along with students from Himalayan University celebrated Children’s Day in collaboration with the urban ICDS at Chimpu-II.
Through Nukkad Natak, child marriage, polygamy and sexual harassment were presented and awareness about the Women Helpline and One stop centre was provided.
A session on good touch & bad touch was also give to children as cases of child abuse have increased, said a statement.
CDPO Jaya Taba, spoke about the various schemes related to women and child.
Vivekananda Kendra Vidyalaya, Roing celebrated Children’s day with a talent show for the primary children.
As a part of the Arunachal Rising Campaign, essay competitions on the topics “Social Media- Boon or Bane”, “Drugs and it’s ill effects on Society”; Gender Empowerment: Issues and Challenges in Arunachal Pradesh”; and “Arunachal 2050: Vision and Dreams” were conducted by Department of IPR, Siang in collaboration with Education Department for class XI and Class XII students in all govt. Higher Secondary Schools in the district. More than 200 students participated in the competition.
Simiin Sirum, a youth group of Bizari village, donated whiteboards and markers to the government secondary school Bizari in Lower Dibang valley to mark the children’s day celebration. Rajen Lyndoh President of the org handed over the whiteboards to the headmaster of the school Toni Pertin. At Daporijo a total of 24 students from Government Higher Secondary School Daporijo and Dumporijo participated in the essay competition.
Hundreds of children on Wednesday, participated in the essay writing competition meant for the students of XI and XII marking the first event of the ‘Arunachal Rising Campaign’ in the West Kameng district on the occasion of Children’s Day. (DIPRO)