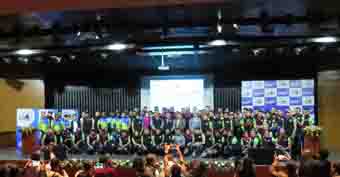 Staff Reporter
ITANAGAR, Nov 14: Around 80 riders are all set for an enchanting ride to Mechukha with Minister of State for Home Affairs Kiren Rijiju flagging off the eight-day Dalmia MTB (Mountain Terrain Biking) Arunachal Flight here this evening.
Mechukha, one of the most sought after tourist destinations, is nestled 6000 feet above the sea level in West Siang district.
Riders from 10 countries, including US and Germany are participating in race’s second edition, besides riders from the country comprising Indian defence forces. There are seven riders from Arunachal, including a woman.
Divided into seven stages, the race will start from Itanagar on Thursday and pass through eight districts, covering a total distance of around 650km in eight days, before reaching its final destination. The riders will make night stopovers at Ziro, Raga, Daporijo, Basar, Kamba and Yapik.
The race will be flagged in at Mechukha coinciding with the beginning of the [email protected], a tourism promotional event, on 23 November.
The presence of famous Bollywood actor Salman Khan during the flagging in ceremony will add more glamour to the event.
Speaking on the occasion, Rijiju emphasized the need to explore the unexplored and pristine tourist destinations in Arunachal Pradesh.
“Arunachal Pradesh has a lot to offer,” Rijiju said, while urging the riders to promote Arunachal Pradesh’s tourism, its rich culture and tradition.
He said the event will be organized in a bigger way the next year.
“The sole objective of the event is to promote state’s tourism through adventure sports,” said Mechukha MLA and MTB Arunachal president Passang Dorjee Sona .
Event director and SSB Commander Rajesh Thakur informed in details about the biking expedition.
The Dalmia group of company has sponsored the event.
MLA Nyamar Karbak, representatives from Dalmia group, central and state government officials attended the programme.